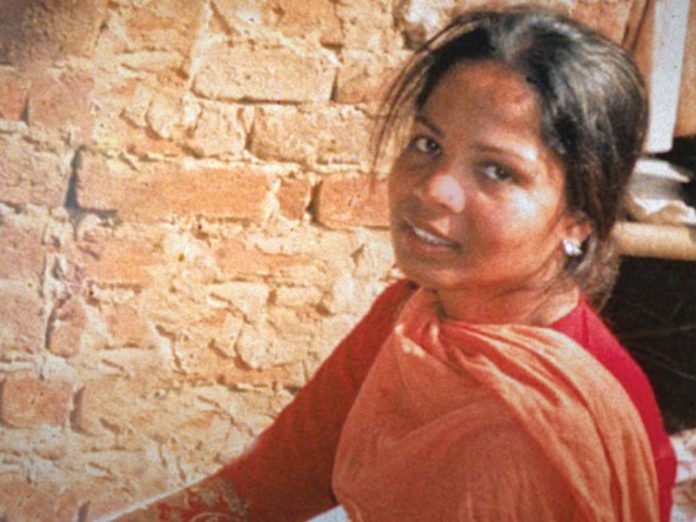 LAHORE, Pakistan (Morning Star News) – Aasiya Noreen, better known as Asia Bibi, has arrived in Canada along with her husband more than six months after being acquitted of blasphemy charges and released from prison in Pakistan, sources said.

After spending eight years on death row in Pakistan’s most infamous blasphemy case before the country’s Supreme Court acquitted her on Oct. 31, 2018, the Christian mother of two and stepmother to three others has reunited with her two daughters after a commercial flight spirited her away from Pakistan late Monday night (May 6), her lawyer and official sources in Pakistan and the United States confirmed.

Her attorney, Saiful Malook, was brimming with joy.

“I am very happy that Bibi will finally be able to breathe freely without the fear of being killed,” Malook told Morning Star News at his Lahore home. “She’s a woman with a very strong faith in God, and I wish her the best for her future life.”

Malook, a Muslim, lauded the efforts of several foreign envoys and rights outfits who advocated for Noreen’s release.

“I’d credit European diplomats, lawmakers and some NGOs [Non-Government Organizations] for Bibi’s freedom,” he said. “They are the ones that maintained pressure on the government to do justice with Bibi.”

Since taking up her case, he said, he has found rumors about impairment of her mental and physical health were “totally baseless.”

“Bibi never complained of mistreatment during her incarceration, but even then rumors claiming that she had been subjected to torture, both mentally and physically, were spread on the social media by people who were only interested in making the most out of her ordeal,” he said.

Noreen was the first woman in Pakistan to be handed the death sentence for alleged blasphemy. Malook said her acquittal was a watershed moment in Pakistan’s judicial history and would set a precedent for freedom of others languishing in jail on trumped-up blasphemy charges.

“I have now taken up the case of Shagufta Emmanuel, another Christian woman on death row in a blasphemy case, and I’m hopeful that she too would soon be free just like Bibi,” he told Morning Star News.

Noreen’s exit from Pakistan was delayed for more than six months after her acquittal, reportedly due to extreme pressure from Pakistan’s security establishment. She was facing constant death threats from Islamist hardliners spearheaded by the violent Tehreek-e-Labbaik Pakistan (TLP). Her acquittal sparked major protests as radical Islamists called for her execution and even threatened Pakistan’s powerful army chief and Supreme Court justices with death if they allowed her to leave the country.

Malook, her attorney, was also forced to leave Pakistan for a few months after the apex court ruled in her favor.

Informed sources confided to Morning Star News that after the Supreme Court ordered her release in November, the 53-year-old Christian woman was shifted to Karachi where she was put into protective custody.

Sentenced to death in 2010, Noreen’s case attracted international attention, with many Western countries rejecting both capital punishment and the concept that blasphemy is a crime.

Blasphemy remains an inflammatory issue in Pakistan, where even unproven accusations of insulting Islam can spark lynching. Since 1990, at least 65 people have reportedly been killed in Pakistan over claims of blasphemy.

The allegations against Noreen date back to 2009, when Muslim women accused her of blasphemy against Muhammad, prophet of Islam, a charge punishable by death under Pakistan’s widely condemned blasphemy laws.

Noreen was harvesting berries with a group of Muslim women when a row broke out over a bowl of water. The Muslim women said that because she had used the bowl, they could no longer touch it, because her faith had made it unclean. Prosecutors alleged that in the ensuing argument, the women said Noreen should convert to Islam. Her response allegedly included comments offensive to Muhammad.

Accusers said she confessed to blasphemy while being beaten, and police arrested her. The ensuing case elicited support from international rights groups, politicians and religious figures.

In January 2011, former Punjab Gov. Salmaan Taseer, who spoke out in her support, was gunned down in broad daylight in Islamabad. His assassin, Mumtaz Qadri, was executed in 2016 after the court found him guilty of murder. He was hanged in February 2016. The TLP was founded by extremists who believe Qadri’s hanging was unjustified.

Only two months after Taseer’s killing, the only Christian minister in the federal cabinet, Shahbaz Bhatti, was also gunned down by members of Tehreek-e-Taliban for supporting Noreen and for advocating that Pakistan’s blasphemy laws be amended.

According to reports, Noreen’s daughters were waiting for her in Calgary. Canadian authorities reportedly said they will keep the family under tight security, and that Noreen would not have any contact with media.

U.S. Secretary of State Mike Pompeo confirmed Noreen’s departure from Pakistan in a statement, saying the United States welcomes the news and wishing her and her family the best.

Pakistan ranked fifth on Christian support organization Open Doors 2019 World Watch list of the 50 countries where it is most difficult to be a Christian, and on Nov. 28, 2018, the United States added Pakistan to its blacklist of countries that violate religious freedom.