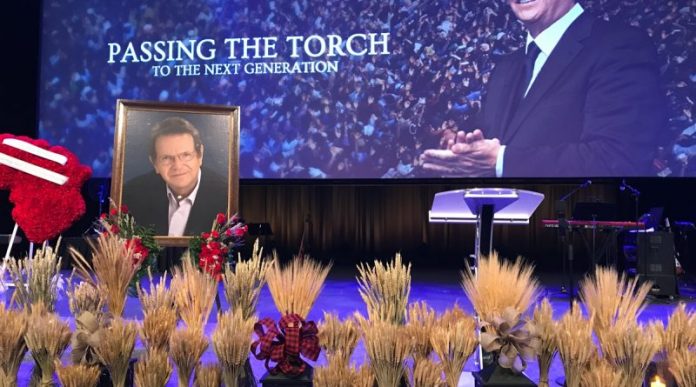 The funeral service was held in December of 2019.

“This was the wish of brother Bonnke himself when he was still alive. He had been saying, smiling, “If they tell you that Bonnke is dead, don’t believe it. He is just in another place and you will meet him in a short time,” – says Rostislav Radchuk.

On January 4th of 2020 memorial service was held at the great Church in Orlando (USA, Florida). Thousands of people from many countries of the world attended this historic event.

About 2,000 people gathered from around the US and around the world for a three-hour celebration of Bonnke’s life and ministry. More than a dozen speakers from Germany, Scandinavia, Switzwerland and India, including a number from African ministries and denominations, lauded Bonnke, for both his zeal and his personal humility.

“There were amazing testimonies. Many details about his missionary trips participants heard for the first time, ” — says Radchuk. — «Bonnke despite of his high status had a very simple and humble heart, noticing and helping each person. “

The memorial service was called “Passing the torch to the next generation”. A large flower arrangement in the shape of the African continent was placed on the stage next to the pulpit. Along the front of the stage were sheaves of wheat, symbolizing the “harvest” of Bonnke’s life.

More than a dozen ministers, representatives from “Christ for all nations”, african christian leaders spoke to the audience. Some well-known ministers, such as Benny Hinn, Bill Johnson, T. D. Jakes, Paula White, and others, recorded video messages.

For all his “spiritual value” he had a very humble heart, sensitive and loving. He and his wife, Anna, loved our large family of eight children, often came to our house for dinner, and we loved him very much. It is a pity that such world-class leaders are leaving us. Let’s pray that the Lord will complete the mission of preaching the gospel on the African continent through the Evangelist Daniel Kolenda, who was chosen for this great service and we were at the last crusade in Nigeria, where brother Reinhard, in front of hundreds of thousands of people, put his hands on brother Kolenda, prayed for him, surrendering him to the grace of God. This was our last crusade with Reinhard Bonnke.

The Rev. Reinhard Bonnke, a German-born Pentecostal faith healer whose open-air revivals in Africa attracted so many followers that in one case people were trampled to death hoping to be cured of their afflictions, died at his home in Florida on Dec. 7. He was 79.