Following an August announcement from the Knights of Columbus that the group would commit at least $250,000 to aid migrants at the US-Mexico border, the fraternal organization’s Texas leaders are announcing a joint effort with a Mexican council to aid migrants south of the border.

A caravan of Knights of Columbus from both Texas and Mexico arrived Oct. 5 at Casa del Migrante, an aid facility in Ciudad Juarez, delivering a truckload of supplies valued at $61,000, according to Terry Simonton, the Knights’ Supreme Director for Texas.

The supplies for the Juarez diocese-run facility included medicine, food, water, diapers, and shoes, he said. The over 40 Knight-volunteers were joined by Bishop José Guadalupe Torres-Campos of Ciudad Juarez and Bishop Mark Seitz of El Paso.

The Knights in El Paso were already providing supplies, cooking meals, and paying for a rented shower for migrants in the city. In May, the Knights’ Diocesan Deputy for El Paso sent a request for additional funds which made its way to Simonton, who talked it over and realized that the Supreme Council in Connecticut would have to help.

“[The El Paso Knights] were renting the showers and they were getting donations to cover that expense— and renting those showers was $1,500 a day,” Simonton, a former state deputy in Texas, explained to CNA.

“It was the kind of shower that sits on a trailer, and it was $1,500 a day. So the more we looked into it, it said they were asking for $9,000 to purchase their own portable heated showers. And that would accommodate probably 60 showers per day…it just made sense to purchase the showers.”

Simonton asked the Supreme Council to cover half the cost.

“They liked the idea, but when it got to the table, and the Supreme Knight, Carl Anderson, said ‘Yes we need to help, but we must do more.’ And that’s when Carl Anderson started the initiative to help out Southern border. Without his vision, this would have never happened.”

He said a number of parishes and virtually all the Knight of Columbus councils in El Paso have been busy, especially since January, raising funds for border relief. Council 11926 and Council 2592 in El Paso had raised about $10,000 on their own to help migrants in the city, he said.

“Between the councils and the parishes, they’d already spent $54,000,” Simonton said.

“All the councils were involved in this in El Paso. But their funds were being depleted, so that’s why they came to us for help. And just out of that simple, $9,000 request, has come this tremendous initiative.”

There were about 75 migrants present at the Casa del Migrante Oct. 5— out of an estimated 20,000 migrants currently waiting in Ciudad Juarez.

“To be able to see the little kids, they were so happy to be there at that center. Because we don’t know what they faced two or three days before then, before they got to the center. So it’s sad, but at the same time they;’re happy, they’re all smiles, because soon hopefully they’ll be able to continue their journey with their families.”

To watch the Knights of Columbus from both the Mexico and the United States work together was a “tremendous blessing,” he said.

Possibly as soon as late October, Simonton said the Knights plan to go and provide similar aid at the border city of Laredo, which is across the fence from Nuevo Laredo, Mexico, as well as Eagle Pass, Texas and Piedras Negras, Mexico.

“Let me be clear: this is not a political statement,” Supreme Knight Carl Anderson said in August. “This is a statement of principle. This is about helping people who need our help right now. And it is a natural and necessary extension of our support for refugees across the world.”

Bishop Seitz, along with Catholic leaders of the Dioceses of Las Cruces, San Jose, Victoria, and Ciudad Juarez toured the Casa del Migrante in late September as well as a Ciudad Juarez parish that has been providing aid to migrants.

The Department of Homeland Security announced new Migrant Protection Protocols in January, providing that migrants arriving illegally or without proper documentation “may be returned to Mexico and wait outside of the U.S. for the duration of their immigration proceedings, where Mexico will provide them with all appropriate humanitarian protections for the duration of their stay.”

These policies have meant the flow of migrants into El Paso has largely dried up, as thousands of migrants remain in Mexico while their asylum claims are processed.

The migrants in Mexico are mostly from Central America, but also from other places including Africa, Haiti, Cuba, and some from South America and Europe, the Knights said.

Bishop Seitz told CNA in September that the diocese  opened a shelter in Oct. 2018 at the pastoral center, a “purely volunteer response,” to deal with the large number of people passing through the city. The temporary shelter has since closed due to a drop in the number of migrants passing through.

“Right now, we’ve seen a huge drop off in the number of people coming because of enforcement actions in Mexico,” Seitz noted.

“So what’s happening is there’s kind of a bottleneck in Ciudad Juarez, and we estimate that there are up to 20,000 people that are pretty much stuck there. They’re afraid to go home, because that’s where they’re fleeing from…they’re afraid to stay in Mexico, because most of them have faced violence there.”

Robberies and kidnappings among the migrants waiting in Mexico are common, he said.

The HOPE Border Institute, along with the Diocese of El Paso, in July initiated a Border Refugee Assistance Fund to send money to organizations working with migrants and refugees in Juarez. 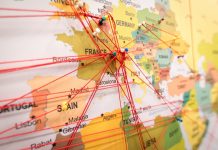 Church April 2, 2020
Interview with the Archbishop of Albania, former President of the WCC by Marianne Ejdersten, WCC director of Communication

Archbishop Anastasios: “Let us transmit from heart to heart the light...