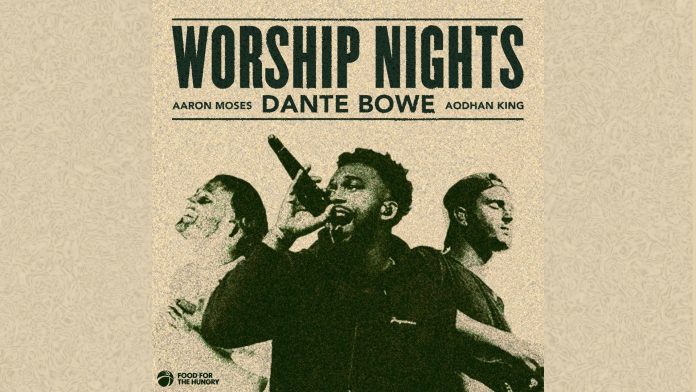 Premier Productions, Dante Bowe and Food for the Hungry announce the Worship Nights Tour. The tour will span eight cities and will see Bowe fresh off the What Are We Waiting For? Tour with For King & Country.

“I think this tour is going to be a special one because we’re going back to simple worship,” said Bowe. “We’re stripping away the smoke, lights and all the extra things we tend to use. Not that those things are bad, but these are going to be nights of remembrance. Remembrance of what Jesus has done and what He has yet to do.”

Audiences can sign up for the exclusive pre-sale on Wednesday, May 18, at dantebowelive.com. Tickets go on sale to the public on Thursday, May 19th at 10:00 a.m. local time.

The eight-city summer tour will kick-off on August 13th in Minneapolis, MN and will stop in Columbus, OH, St. Louis, MO and Memphis, TN before the final show on August 21st in Lexington, KY. For a full list of dates and cities, see below.

About Premier Productions:
Founded in 1996, Premier Productions has sold over 20 million tickets to patrons. Premier has been a Top 20 global promoter and has produced more than 2,000 concerts and events in the past five years. Pollstar named Premier the #1 faith and family independent promoter in the last 10 years. Producing events that move the soul both nationally and internationally, Premier is proud to have helped raise more than $271 million to improve the lives of children and communities in 100+ countries worldwide. Whether it’s a large multi-day festival, sold-out concert or intimate conference, Premier seeks to positively impact the lives of every attendee so they leave encouraged, happy and hopeful. Premier is currently promoting acts including Hillsong UNITED, Dude Perfect, Lauren Daigle, Hillsong Worship, Baby Shark, Casting Crowns, Chris Tomlin, Sadie Robertson, Elevation Worship, Kari Jobe Bethel Music and many more.

About Dante Bowe:
Dante Bowe is an American Christian singer, and songwriter. Bowe is a member of the Bethel Music collective and the Maverick City Music collective. In 2017, Bowe released his debut single, “Potter and Friend” featuring Jesse Cline, which was shortly followed with the independent release of his debut studio album, Son of a Father. Bowe signed with Bethel Music in June 2019.

In 2020, He made his debut appearance with Bethel with the single “Champion” which was featured on the album Revival’s in the Air. This was also followed by three standalone singles: “Don’t Talk About It” featuring Jesse Cline, “Be Alright” featuring Amanda Lindsey Cook, and “Voice of God” featuring Steffany Gretzinger and Chandler Moore. In 2021, he released his second studio album, Circles, which contained the hit single “Joyful.” “Joyful” won the GMA Dove Award for Contemporary Gospel Recorded Song of the Year at the 2021 GMA Dove Awards. Circles debuted at No. 7 on Billboard’s Top Gospel Albums chart in the United States. Bowe also featured on several collaborations, most notably the song “Wait on You” alongside Elevation Worship, Maverick City Music and Chandler Moore. Bowe received three nominations for the Grammy Award for Best Gospel Performance/Song at the 2022 Grammy Awards: two solo nominations for his singles “Voice of God” and “Joyful,” and a songwriting nomination for “Wait on You.”