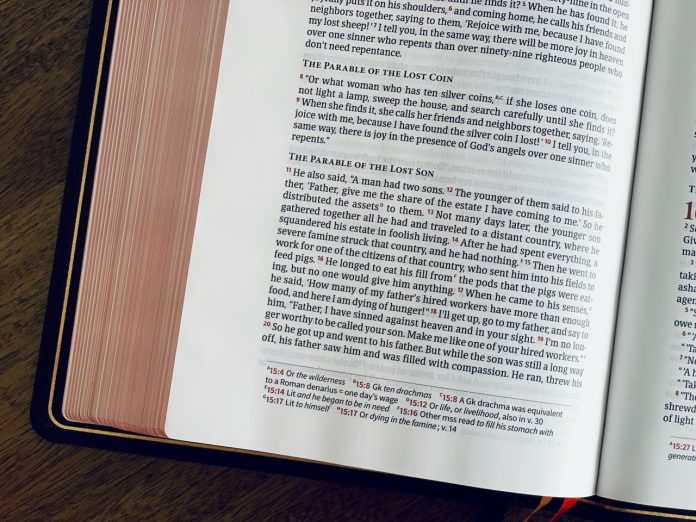 Jesus Christ’s Parable of the Prodigal Son is a lesson about forgiveness, rejoicing, and how to show a true welcome to those struggling with their sins, Pope Francis said before the Angelus on Sunday.

He spoke to a crowd of about 30,000 people gathered in St. Peter’s Square for the Angelus, according to estimates from the Vatican Gendarmerie.

For Pope Francis, Jesus’ parable shows “that God is a Father who not only welcomes us back, but rejoices and throws a feast for his son who has returned home after having squandered all his possessions. We are that son, and it is moving to think about how much the Father always loves us and waits for us.”

The Parable of the Prodigal Son, recounted in the Gospel of Luke’s fifteenth chapter, tells the story of a young man who asks his father for his share of his inheritance, then leaves the country to live a life of dissolution. After losing everything, the son returns home thinking he can beg his father to give him a menial job and a lowly place in his household. His father instead runs to welcome his lost son and throws a celebration for him.

The father’s loyal son—the prodigal son’s older brother—perceives this treatment as a wrong. This older son, Pope Francis said, “goes into a crisis in front of his father,” and such fatherly behavior towards an errant relative can also put many of us today in a crisis.

“We are tempted to take his side, at least in part: he had always done his duty, he had not left home, and so he becomes indignant on seeing the father embracing his son again after having behaved so badly,” the pope commented.

The older son tells his father he objects to celebrating “this son of yours.” He professes not to understand his father.

“These words illustrate the older son’s problem,” the pope commented. “He bases his relationship with his father solely on pure observance of commands, on a sense of duty. This could also be our problem, the problem among ourselves and with God: to lose sight that he is a Father and to live a distant religion, composed of prohibitions and duties.”

Such a habit makes us behave with “rigidity towards our neighbor, whom we no longer see as a brother or sister.”

The older son’s words distance him from his own brother and he “risks remaining outside of the house,” said Pope Francis. In response, the father pleaded to him: “Son, you are always with me, and all that is mine is yours.”

“He tries to make him understand that for him, every child is all of his life,” the pope commented. “The ones who know this well are parents, who are very close to feeling like God does.” The pontiff quoted the nineteenth century French novelist Honoré de Balzac, one of whose characters said “When I became a father, I understood God.”

The father in Jesus’ parable opens his heart to his dutiful son and explains: “it was fitting to make merry and be glad, for this your brother was dead, and is alive.”

“Why should we do this?” the pope asked. “Because this helps to overcome the fear and discouragement that can come from remembering one’s sins. Those who have made mistakes often feel reproached in their own hearts. Distance, indifference and harsh words do not help. Therefore, like the father, it is necessary to offer them a warm welcome that encourages them to go ahead.”

Despite the older brother’s concern that his wayward sibling did many bad things, the Pope said, a “warm welcome” is still imperative. He encouraged Christians to reflect on their own habits and to ask themselves: “Do we do this? Do we look for those who are far away? Do we want to celebrate with them?”

“How much good an open heart, true listening, a transparent smile can do; to celebrate, not to make them feel uncomfortable!”

While the father of the prodigal son could have simply forgiven his wayward child by giving him a place in his home and putting him to work, the father’s reaction in Jesus’ parable teaches us about God’s response.

“God does not know how to forgive without celebrating! And the Father celebrates because of the joy he has because his son has returned,” the pope said. He added that, like the father in the parable, we need to rejoice.

“When someone whose heart is synchronized with God’s sees the repentance of a person, they rejoice, no matter how serious their mistakes may have been,” he continued. “Do not stay focused on errors, do not point fingers at what they have done wrong, but rejoice over the good because another person’s good is mine as well! And we, do we know how to rejoice for others?”

Pope Francis recounted a theatrical depiction of the prodigal son story, in which the wayward son wrote to his father telling him of his repentance. He asked his father that if he wants to welcome him, to put a white handkerchief in his home’s window. When the son turned the final corner on his trip home, he discovered that his father had tied white handkerchiefs all over the front of the house.

“The Father welcomes like this, totally, joyfully. This is our Father!” said the pope. He closed his remarks before the Angelus with a prayer: “May the Virgin Mary teach us how to receive God’s mercy so that it might become the light by which we see our neighbors.”

In remarks after the Angelus, Pope Francis again spoke of the Russian invasion of Ukraine. He said more than a month had passed since “the beginning of this cruel and senseless war.”

“We need to reject war, a place of death where fathers and mothers bury their children, where men kill their brothers and sisters without even having seen them, where the powerful decide and the poor die,” he said.I agree to receive other communications from EWTN.*

He especially lamented war’s effects on children, saying “war does not devastate the present only, but the future of a society as well.”

Pope Francis again appealed for an end to war and for a serious move towards peace. He stressed the dangers of seeing war as inevitable, adding: “Before the danger of self-destruction, may humanity understand that the moment has come to abolish war, to erase it from human history before it erases human history.”

The pope again encouraged prayers for the intercession of the Virgin Mary, Queen of Peace, to whom he had consecrated humanity and especially Russia and Ukraine on March 25. That prayer of consecration was joined by scores of bishops, priests and lay faithful from around the world. Pope Francis thanked everyone for “such a huge and intense participation.”

Pope Francis greeted various visitors and pilgrims from Rome and from afar, including the athletes of the Rome Marathon. The pope noted that Vatican Athletes has an initiative involving a number of athletes in a solidarity initiative with those in need in Rome.

“Congratulations to you!” he said.

Pope Francis added that two years ago, he had led prayers in St. Peter’s Square for an end to the pandemic, as he is now praying for an end to the war in Ukraine. He announced that visitors to the square today would receive a free book as a gift. The book was produced by the Vatican Covid-19 Commission with the Dicastery for Communication.

“It is an invitation to pray without fear during moments of difficulty, always having faith in the Lord,” said the pope. He asked everyone to remember to pray for him.