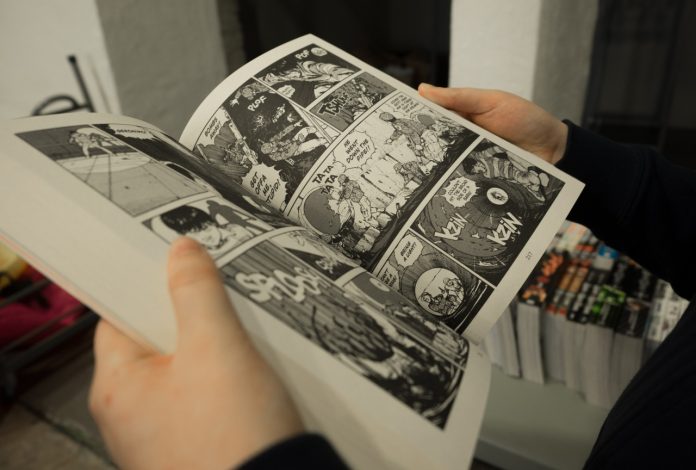 Father Patrick Retter kept his wits about him as he faced the giant, red-eyed cobra slithering out of the possessed woman’s mouth.

“In nomine Patris et Filii et Spiritus Sancti,” he chanted the Sign of the Cross in Latin, as he thrust a bottle of holy water at the demon.

The woman bit his hand with her teeth — emitting a loud crunch — but the priest kept going. Clutching his wooden cross, he declared, “I cast you and every satanic specter out — in the name of the Lord Jesus Christ! It is he who commands you.”

So begins one of the many action-packed scenes in the “Soulfinder” graphic novel series about a fictional “special forces of exorcists” within the Catholic Church.

“‘Soulfinder’ is about a major order of combat veteran exorcists who are recruited to engage in spiritual warfare with a demon called Blackfire until the end of time,” Douglas Ernst, the writer and creator of the seriestold CNA.

The 42-year-old writer began the series to fill a void in today’s comic-book world — and in the culture.

“The heroes that I grew up reading are often unrecognizable because the creators at Marvel and DC are activists posing as serious storytellers,” he explained. “I created ‘Soulfinder’ because I wanted to give people solid stories and artwork that also imparts something good, true, and beautiful.”

Together with a team of artists — Timothy Lim, Brett R. Smith, Matthew Weldon, and Dave Dorman, to name a few — Ernst brings to life characters who dedicate themselves to serving God after serving their country. They apply their experience of fighting in the physical world to, now, battling in the spiritual realm.

The series is already saving souls, both inside and outside of its pages.

“I love it when someone writes me and says that reading the books brought them back to the Catholic Church after they drifted away,” Ernst revealed. “Perhaps they haven’t gone to Mass in years, but something in the stories rekindled the flame of faith.”

A Catholic veteran himself, Ernst shares something in common with his protagonists. He served as a mechanized infantryman in the ‘90s, leaving before the 9/11 terrorist attacks. He saw many of his friends go to war — and never return.

Ernst brings this background to his books, which follow the adventures of Retter (an Iraq/Afghanistan war veteran), Father Reginald Crane (a Vietnam veteran), and Detective Gregory Chua.

“My hope is that I’ve done right by the military community,” he said. “Selfless service and the willingness to lay down one’s life for another is a crucial component of the series.”

Ernst, who previously worked as a journalist in Washington, D.C., now splits his time between Reno, Nevada, and Missoula, Montana, while focusing on his graphic novels.

There is a dramatic reality at the core of these works of fiction. The series illustrates Catholic priests not only as courageous heroes but also as imperfect human beings — men who may fall, but always pick themselves back up, driven by a desire to do the right thing. Along the way, their personality (and sense of humor) shines through the narrative.

Available through ICONIC Comics, the first two volumes also appear on Amazon Kindle. In January, both made No. 1 on Amazon’s list of new releases in “Religious Graphic Novels.”

Ernst — who learned to read by devouring the adventures of Spider-Man, Iron Man, Daredevil, and Captain America as a boy — began his series after encountering mainstream comic books filled with moral relativism.

“Where are the Catholic creators who will attempt to pick up where G.K. Chesterton and J.R.R. Tolkien left off?” he asked. “That’s a tall task, but the culture will continue to drift into dangerous waters if Catholic writers and artists do not enter as many creative places as possible.”

Ernst shared what he did to prepare for the books, to ensure that they were theologically sound.

Being a “cradle Catholic” helped, he admitted, in addition to consulting with other Catholics, including a priest. His stories, he said, have been inspired by the works of St. Francis de Sales, Father Gabriele Amorth, St. Thomas Aquinas, St. Catherine of Siena, and others.

Ernst began the series after organizing a hugely successful crowdfunding campaign. He also credits his success to working with talented artists and to Word on Fire, Bishop Robert Barron’s media ministry, which has featured his work in blog and YouTube interviews.

Teenagers and adults seeking classic storytelling with “good vs. evil” seem to enjoy Soulfinder, Ernst said of his series, which he rates as “PG-13.” This is because, among other things, the series addresses a dark subject matter.

In his first book with artist Timothy Lim, also a practicing Catholic, a black mass scene involves a naked woman.

“She is nude, but there’s shadows where there needs to be shadows,” Ernst pointed out the strategic shading over her body. “It’s also shown as a bad thing.”

While the series is for more mature readers, it offers content for Catholics and non-Catholics alike.

“Most Catholic characters in modern comics and in Hollywood tend to be cartoonish version of the Faith,” he said.

His series, he emphasized, is different.

“It makes me incredibly happy when readers who are not Catholic say that these stories show a side of our faith that they have never encountered before.”

Third book on the way

Ernst told CNA the third installment of the series is in production.

“‘Soulfinder: Infinite Ascent’ takes our heroes to the other side of the world to apprehend a rogue member of the CIA who has evaded capture through supernatural means,” Ernst told CNA. “The U.S. government was so impressed with Father Retter and his friends regarding their success in ‘Soulfinder: Black Tide’ that it returns to them once again to clean up a global network of occultists.”

While there is no official release date yet, Ernst expects the book to be colored and lettered in March. From there, it will be sent to the printer.

“The story, at its core, focuses on the loss of loved ones, grief, and the need for forgiveness,” Ernst hinted. “The key to saving the day hinges on one character’s ability to forgive others for their trespasses against him.”

The volume will include a bonus story, “Soulfinder: War Cry,” which takes place at Arlington Cemetery.

In the end, Ernst hopes that these books will bring him, and his readers, closer to heaven.

“I know that one day I will stand before my Creator and I’ll have to give an account of what I’ve done with the talents I’ve been given,” he said. “I hope that my creative team has done its small part in saving souls while simultaneously entertaining readers.”