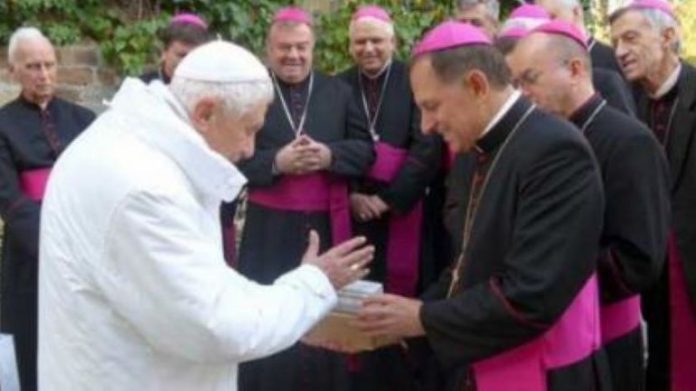 During a working visit to the Vatican, the Metropolitan of Lviv of the RCC Mieczyslaw Mokrzycki had the opportunity to meet with Pope Emeritus Benedict XVI.

“The Holy Father asked about the situation in Ukraine, expressed words of support and gave his blessing to Ukraine. Archbishop Mieczyslaw Mokrzycki together with Pope Benedict XVI prayed in the Vatican gardens near the Lourdes Grotto for peace in Ukraine and the end of the war,” the official website of the Roman Catholic Church in Ukraine reports.

On September 23-25, the Vatican hosted the Plenary Assembly of the Council of Episcopal Conferences of Europe, dedicated to the 50th anniversary of this continental association. Among the hierarchs who participated in the Assembly, the conference of Roman Catholic Bishops of Ukraine was represented by deputy Conference Chairman, Metropolitan of Lviv, Archbishop Mieczyslaw Mokrzycki.

On September 29, Archbishop Mieczyslaw Mokrzycki celebrated the 14th anniversary of his episcopal ordination.