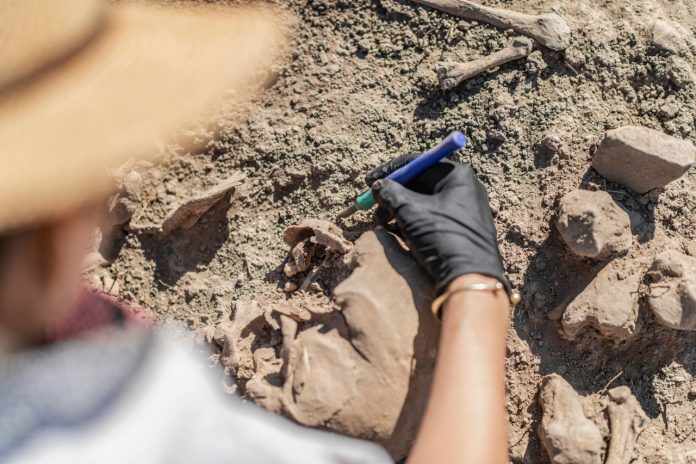 In the town of Horodok, Khmelnytskyi region, in the course of excavations archaeologists discovered settlements of the early Scythian period, VII century BC, the remains of a destroyed stone castle and unique tiles.

This was reported to Ukrinform by Candidate of Historical Sciences, head of the Kamianets-Podilsky Architectural and Archaeological expedition of the State Enterprise “Research Center “Protective Archaeological Service” under the Institute of Archeology of the National Academy of Sciences of Ukraine Pavlo Nechytailo.

“An outstanding find for Horodok and the study of small towns is an untouched layer of early Scythian time discovered under the bell tower of St. Anna’s church. This is a great success and an important moment in the city’s history. Along with early Scythian ceramics, we found a fragment of a fishing sinker on the net. It is an interesting fact that 2300 years ago, where the bell tower of the Church of St. Anna later appeared, people lived and fished even before Herodotus,” Nechytailo said.

According to him, in Horodok archaeologists also found the remains of a stone castle of the second half of the XIII-XIV centuries. At the same time, the question remains when this fortification was turned into stone.

“The castle was actually dismantled to the foundation, but some fragments of the walls were preserved, which together with parts of the foundations reach more than 2 meters. The situation with Horodok Castle is very deplorable. Not only was it dismantled at the end of the XVIII century, but it is also an Urban Development Zone, the entire mountain was dug up and rebuilt many times, and after the war, they also made a road to Khmelnytskyi there. That is, the fact that some stone fortifications have now been found is just a sign from God. We didn’t expect masonry. If the Horodok community goes to the meeting and research continues, the town will receive a larger part of this castle than it has now,” Nechitailo added.

As the archaeologist noted, the town’s coat of arms depicts a stone wall and obviously, it was found during the current expedition.

“Although the excavations were small in area, a large amount of material was found. It is extremely important for the town as it virtually represents all stages of its urban history, starting from the XIV century and ending with the XVII century. We have fragmentarily preserved dishes and unique tiles of the late XVI century. This is a very fragmented material for everything was dug up there and the castle was destroyed,” the expedition leader said.

Nechytailo also noted that this year archaeological expeditions do not take place on time due to the fact that obtaining permits from the Ministry of culture and information policy is delayed.