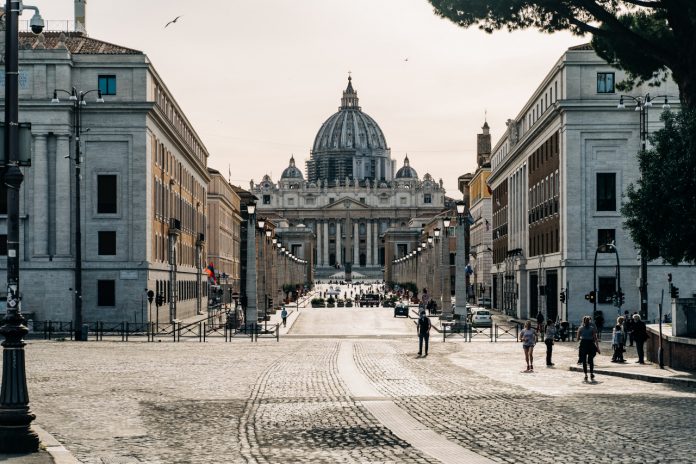 We should ask God for the gift of conversion this Advent, Pope Francis said in his Angelus address Sunday.

Speaking from a window overlooking a rainswept St. Peter’s Square Dec. 6, the pope described Advent as an “itinerary of conversion.”

But he acknowledged that true conversion is difficult and we are tempted to believe it is impossible to leave our sins behind.

He said: “What can we do in these cases, when one would like to go but feels he or she cannot do it? First of all, remind ourselves that conversion is a grace: no one can convert by his or own strength.”

“It is a grace that the Lord gives you, and thus we need to forcefully ask God for it. To ask God to convert us to the degree in which we open ourselves up to the beauty, the goodness, the tenderness of God.”

In his address, the pope meditated on Sunday’s Gospel reading, Mark 1:1-8, which describes John the Baptist’s mission in the wilderness.

He explained that in biblical terms conversion means a change of direction.

“In the moral and spiritual life, to convert means to turn oneself from evil to good, from sin to love of God. It is what the Baptist was teaching, who in the desert of Judea was ‘preaching a baptism of repentance for the forgiveness of sins’” he said.

“Receiving baptism was an outward and visible sign of the conversion of those who listened to his preaching and decided to do penance. That baptism occurred with immersion in the Jordan, in water, but it proved worthless; it was a only a sign and it was worthless if there was no willingness to repent and change one’s life.”

The pope explained that true conversion is marked, first of all, by detachment from sin and worldiness. He said that John the Baptist embodied this through his “austere” life in the desert.

“Conversion involves suffering for the sins committed, the desire to free yourself from them, the intention to exclude them from your life forever. To exclude sin it is also necessary to reject everything that is linked to it, the things that are linked to sin, that is, one must reject the worldly mentality, excessive esteem for comforts, excessive esteem for pleasure, well-being, wealth,” he said.

The second hallmark of conversion, the pope said, is the search for God and his Kingdom. Detachment from comforts and worldliness is not an end in itself, he explained, “but is aimed at obtaining something greater, namely, the Kingdom of God, communion with God, friendship with God.”

He observed that it is hard to break the bonds of sin. He cited “inconstancy, discouragement, malice, unwholesome environments,” and “bad examples” as obstacles to our freedom.

“At times the yearning we feel toward the Lord is too weak and it almost seems that God is silent; his promises of consolation seem far away and unreal to us,” he noted.

He continued: “And so one is tempted to say that it is impossible to truly convert. How often we have heard this discouragement! ‘No, I can’t do it. I barely start and then I turn back.’ And this is bad. But it is possible. It is possible.”

He concluded: “May Mary Most Holy, whom we will celebrate the day after tomorrow as the Immaculate, help us to separate ourselves more and more from sin and worldliness, in order to open ourselves to God, to His Word, to his love which restores and saves.”

After reciting the Angelus, the pope praised pilgrims for joining him in St. Peter’s Square despite the driving rain.

“As you can see, the Christmas tree has been erected in the square and the nativity scene is being set up,” he said, referring to a tree donated to the Vatican by the city of Kočevje in southeast Slovenia. The tree, a Norway spruce that is almost 92 feet tall, will be lit up on Dec. 11.

The pope said: “These days even in many homes these two Christmas signs are prepared, for the joy of children … and even adults! They are signs of hope, especially in this difficult time.”

He added: “Let us not stop at the sign, but go to the meaning, that is, to Jesus, to the love of God that he has revealed to us, to go to the infinite goodness that he has made shine on the world.”

“There is no pandemic, there is no crisis, that can extinguish this light. Let us allow it to enter our heart, and let us lend a hand to those who need it most. In this way God will be born anew in us and among us.”