“He saw the dignity of people made in the image and likeness of God. That was a turning point for what he did. That is one of our goals – to help people rediscover that basic approach to other people is to see in them Christ the Lord and to try to minister to Jesus in that other person as best as we can,” Zehnle told CNA.

July 9 marked the 123rd anniversary of Tolton’s death. The mile-long pilgrimage in Quincy, Ill., began outside of St. Peter Catholic school and ended with a series of prayers at Tolton’s grave at St. Peter Catholic Cemetery. The pilgrimage is meant to spread the knowledge of Venerable Tolton and to pray for the advancement of his cause for canonization.

Fr. Zehnle said the death of George Floyd had a profound impact on him. In response, he prayed at Tolton’s grave during the protests. He then decided for this year’s pilgrimage to place an emphasis on overcoming racism.

“I knew as soon as that happened that I need to go pray at Father Tolton’s grave… We need Father Tolton’s help with this one. [Then] maybe a week or so later, I wrote a prayer asking God to help us overcome racism through Father Tolton’s intercession,” he said.

“I think anyone who comes into contact with Tolton’s story, you don’t have to read a lot about him before suddenly there’s something about his life, but just sort of grabs you and brings you into it,” he said.

Fr. Zehnle said a majority of the pilgrimage attendees have a standing devotion to Tolton. He said the holy man had a profound impact on Quincy and is remembered as a person dedicated to human dignity. He said that when parishes were divided on ethnic lines, the priest welcomed all people to Mass regardless of their ethnicity.

“He never shied away from ministry to people, without any consideration for what this color of their skin was. He served people because he was Catholic because they came to him needing help and whatever form that was. It’s an honest approach to life,” he said.

Peter Paul escaped shortly after the beginning of the Civil War and joined the Union army, dying shortly thereafter. Martha Jane then escaped to Illinois in 1862 with Augustus and his siblings, Charley and Anne.

Augustus went to Rome in 1880 to attend a seminary of the Congregation for Propagation of the Faith. He was ordained a priest in the Archbasilica of Saint John Lateran on Holy Saturday 1886, and was sent back to serve in Illinois in the Diocese of Alton. He worked at a parish in Quincy, but met with opposition from a white priest, and in 1889 secured permission to transfer to the Archdiocese of Chicago.

In Chicago he founded a black parish, Saint Monica’s. He died July 9, 1897 from heat stroke and heart failure, at the age of 43.

The Chicago archdiocese opened Fr. Tolton’s cause for canonization in 2010. In June 2019 he was declared Venerable, an acknowledgement that he lived a life of heroic virtue. 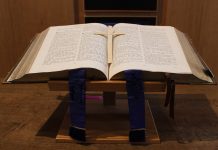