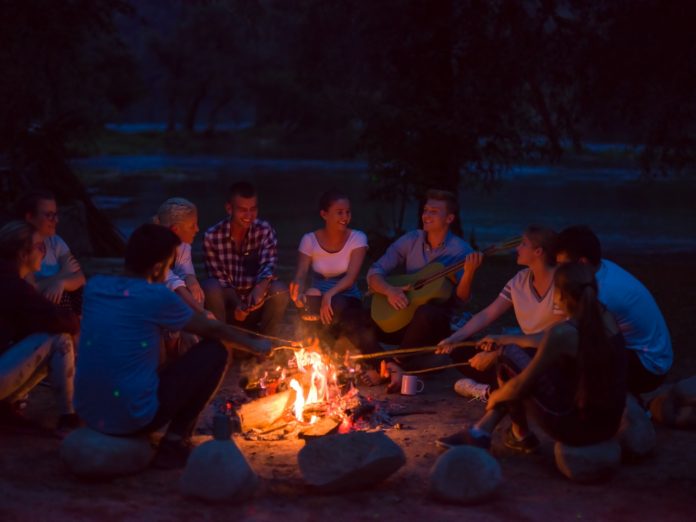 When it’s time for camp this summer, Catholic youth around the country will listen to inspirational talks, make friends in small groups, and sing praise and worship music around a bonfire– all in their very own living room and backyard.

In light of COVID-19 restrictions, many Catholic summer camps have had to close their doors this summer. But some of those camps aim to provide a camp experience to kids this summer, albeit virtually, and to keep themselves afloat while they do it.

“The Lord saw our hunger to reach the young people and he said, listen, I’m going to overcome this barrier,” said Dan DeMatte, founder and executive director of Catholic Youth Summer Camp (CYSC). The camp, based in Centerburg, OH, plans to offer both an in-person and a virtual camp experience this year.

Camp Wojtyla, based in Colorado, will offer a virtual program for kids and their families to engage in daily activities such as challenges, videos, and prayer. But as a wilderness camp, the idea of adapting Camp Wojtyla to an online format initially seemed odd.

“It is a little outside of our wheelhouse,” Eby told CNA. “We really do try to minimize screens. There’s not too much technology, or I guess modern technology, at our wilderness camp.”

Totus Tuus is a week-long catechetical day camp program run in dioceses around the country.

Cassie Zimmer, a 20 year old Totus Tuus missionary in the diocese of Marquette, will lead a team of six missionaries to deliver a completely virtual summer program. This summer marks her 3rd year teaching the program.

“We have to just kind of learn how to be good at doing videos,” said Zimmer. “I don’t even know if this is a Totus Tuus program, per say, it’s more of a Totus Tuus TV program.”

The virtual program from CYSC will employ a box of materials delivered to each virtual camper’s door, which will contain materials for activities and games.

“Imagine your son or daughter pitching a tent in their bedroom or their backyard or their basement, and having all the aspects of catholic youth summer camp brought to them on a daily basis through the whole course of the week,” DeMatte said in a video promoting the camp to parents.

The kids at CYSC will even have a virtual cabin leader, who will remotely guide his or her small group through the same kind of activities a kid would expect at summer camp.

At Camp Wojtyla, campers will be encouraged to build a chapel out of materials they find outside, like flowers, rocks, and sticks. Every morning, they will be encouraged to pray there before plugging into the camp’s introductory video, called “gritty masters,” over breakfast. The video will explain the day’s activities, and will subtly encourage campers to do their dishes.

Campers will have the opportunity to join in a summer camp bonfire at the end of the week, though with some social-distancing modifications.

Virtual campers will be invited to build their own fire and join in livestreamed songs and chants– all the things that ought to culminate a summer camp experience.

“We try to take as much of our typical day to day program that is at camp and help people to live that out in their own home, with a virtual platform, that will allow for real experiences,” Eby told CNA.

Although the Totus Tuus program differs vastly in each diocese, Totus Tuus staff in the Diocese of Marquette, Michigan, will offer a weekly “data drop” to those who sign up for the program. The staff will be busy all summer recording and editing videos, employing everything from saint costumes to gorilla suits to keep campers engaged.

At first, 19 year old Ethan Wilcox, a seminarian who will teach the virtual program this year, doubted the viability of a virtual Totus Tuus program.

“I thought, there’s no way, how is this going to work?” said Wilcox.

But In spite of the limitations, many camp organizers are confident that virtual platforms, such as Zoom, will have a meaningful impact on kid’s lives.

“Kids are having encounters with Jesus. We’re had kids filled with the Holy Spirit and transformed over the Zoom platform,” DeMatte told CNA.

DeMatte compared those who lack faith that God will work over a virtual platform to the people of towns in the Gospels that lacked faith in Christ. Jesus never worked a miracle in those towns, DeMatte noted.

“The level of our faith we have determines the degree to which God’s power can be activated in people’s lives,” said DeMatte.

“With the new evangelization, technology is really something that the Church needs to look into,” said Wilcox. While he was quarantined at home due to the coronavirus, Wilcox broadcast videos of himself singing praise and worship music over Facebook Live and was overwhelmed by the response.

He sees technology as “a tool for the Church.”

“The Catholic Church has stepped up to meet people in the digital age,” said Grace Theoret, an 18 year old Totus Tuus missionary in the Diocese of Marquette. She described a plethora of digital Catholic conferences that were made available this spring.

The digital platform will allow many summer camps to reach a much wider audience than ever before.

In just eight weeks of virtual ministry this spring, DeMatte said that Damascus Catholic Mission Campus, the organization overarching CYSC, reached over 150,000 people. At Camp Wojtyla, Eby said she has seen a lot of families sign up for the virtual camp who had initially been waitlisted.

Emma Kate Callahan, a 21-year-old Totus Tuus missionary in the Diocese of Pueblo, CO, said that Totus Tuus is now able to virtually minister to four more parishes than it had originally planned for this summer.

Despite the potential for a wider reach of their ministry, some worry that the camps’ reliance on technology will compromise their potential for meaningful relationships.

“You don’t really have the same interactions online,” said Callahan. “You just can’t beat being face to face with a child and looking into their eyes and seeing the face of Jesus.”

This concern is shared by many parents, who wonder if online Catholic summer camp is a worthy investment.

“It’s hard to replace being in person with people, no matter how creative we are with content,” said Anna Witham, an early-childhood educator in Minnesota. “As an educator and a parent and a Catholic, it’s important for me to give my kids real experiences.”

“I’m a hard no on virtual summer camp,” Mary Walker, a youth minister in the Diocese of Arlington, VA, told CNA.

“Me and a few of my friends have decided that because we’re probably going back to virtual learning in the fall, that we need to have as few screens as possible during summer as possible to kind of reset and reboot,” she said.

“I’ve always been a parent who tries to limit screen time,” said Witham. “I hadn’t even thought to sign my kids up for anything like that because I feel like they needed a break from structured activities delivered via screen.”

But Walker said that there’s a reason beyond spurning technology to opt out of Catholic summer camps.

“Parents are the primary educators of their children in matters of faith,” she told CNA. “And I think it’s prime time for parents to stand up and take ownership of that.”

In fact, many Catholic summer camps are embracing the fact that parents will be able to engage in the material alongside their children.

“What do we have? Families,” said Zimmer, who leads her six-person Totus Tuus team. “We can build up the family unit. We are gearing this towards hopefully being able to help the parents teach the kids.”

“There’s opportunity there to have the parents involved in the mission just as much as the kids are,” said 22 year old Ben Gregory, who is part of Zimmer’s team. “(It’s) likely there will be conversations happening amongst the families.”

By engaging the whole family, moreover, Catholic summer camps hope to simply stay afloat themselves. One summer without camp could threaten the existence of many programs.

“The summer camp industry, as a whole, is really in danger right now,” said DeMatte. “I think you’ll see a lot of camps close.” He described that 60%-75% or more of a summer camp’s revenue is generated over the summer. One summer’s campers, moreover, fuel the next year’s admissions.

“I hope that being in this environment with other Catholics, that for our campers and our families and all who are part of our mission, we can come together and say, ‘this isn’t going to be forever,’” said Eby. “We’ve got to keep the hunger, the desire, the flame.”

Regardless of how their camp is delivered, many Catholic summer camps share the determination to remain steadfast to their mission of sharing Christ.

“We don’t exist to run summer camps, we exist to proclaim the name of Jesus,” said DeMatte. “If we think of this from heaven’s perspective, God is like, ‘are you kidding me, you don’t think I can’t change kids’ lives through an online platform?”