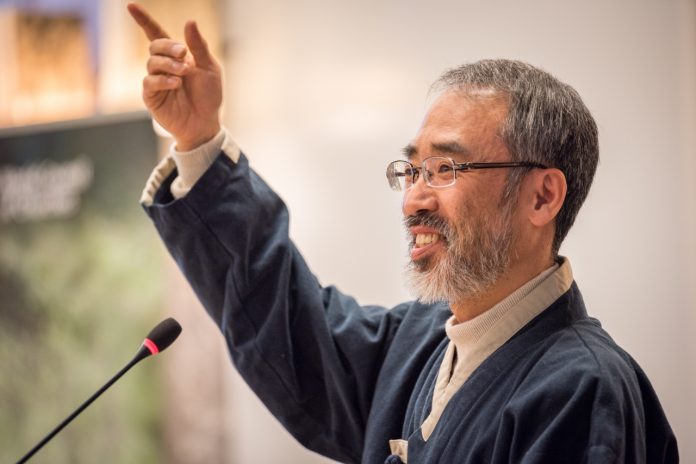 On day 847 of a 1,000-day pilgrimage for peace on the Korean Peninsula, the Bargn Nuri Community stopped at the World Council of Churches (WCC) for a Life and Peace Conference.

“To open the door to a new civilization of life and peace, it is necessary to resolve the wounds and sorrows caused by the age of violence,” said Chelho Choi, founder of the Bargn Nuri Community from South Korea in a speech.

The conference was titled “A New Era for Korean Peninsula, Northeast Asia and Beyond” and was organized by the WCC and the Bargn Nuri (Bright World) community to discuss peace, Korean unity and a nuclear-free life.

It opened with a powerful Korean Samulnori drumming session with four drummers from around 100 community members who visited the Ecumenical Centre for the conference ranging from babes in arms to grandparents.

Choi’s quote, “Hope for the future is never in the future; it is in the here and now,” was an inspiration to speakers such as Ariane Denis of the International Peace Bureau.

Denis noted that the world spends some 1.8 trillion U.S. dollars in military spending.

Start of the pilgrimage

Bargn Nuri Community started the Life and Peace Pilgrimage in October 2017 when tensions in the Korean Peninsula were higher than ever before.

“May all nuclear weapons and weapons of war be abolished, and the demilitarized zone expand from Halla to Baekdu mountain and beyond.”

The group involves whole families from communities, even with small children, and has visited Vietnam, Japan, Russia, France, the United Kingdom, and Switzerland.

“Our aim is to achieve demilitarization and permanent neutrality of the Korean Peninsula and to expand life and peace communities in Northeast Asia,” the community says.

Choi said, “To work towards reunification, we already have a clear set of principles that were agreed upon following the war. They are the principles of ‘independence and peace.’”

He noted that the Korean division problem has long been owned by both the two Koreas “but is complicated by the interests of our neighbours.”

‘Once the Korean War ends’

“Once the Korean War ends and North Korea and the U.S. enter into diplomatic relations, the United States loses its rationale for staying in the Korean Peninsula. For this reason, the U.S. may be reluctant to end the Korean War.”

The Korean War that divided the country in two was fought from 1950 to 1953, but fighting ceased with an armistice and a peace treaty is yet to be signed.

“The mission you are gathered together to pursue is truly as faithful witnesses to Christ, ‘For he is our peace; in his flesh, he has made both groups into one and has broken down the dividing wall, that is, the hostility between us,’ ” (Ephesians 2:14) said Tveit.

“This expression of Christian solidarity and love for each other is the sign of shared Christian discipleship, and a true witness to the wider world of the possibility – even the inevitability – of peace, reconciliation, and unity,” said Tveit.

WCC deputy general secretary Dr Isabel Apawo Phiri told the gathering, “We intend to walk with you in this journey for the peaceful reunification of the Korean Peninsula to the very end.

“I was moved by your prayer for life and peace that says make us a country that is against war. This is a prayer for the whole world. This is line with God’s view for people all over the world.”

Daniel Högsta, campaign coordinator of the Nobel Peace Prize Laureate group International Campaign to Abolish Nuclear Weapons, said, “You are living peace. You are the inspiration that the world needs. We will join you in your mission for peace.”

Peter Prove, director for the WCC’s Commission of the Churches on International Affairs, heads the Ecumenical Forum for Peace, Reunification, and Development Cooperation.

“This pilgrimage does not end here. It will continue in 2020,” said Prove, who noted that the WCC’s search for peace, reconciliation and reunification of the Korean peninsula and promotion of inter-church encounter and dialogue between North and South Korean Christians dates back more than 30 years.

“It dates back to the ‘Tozanso Consultation’ on ‘Peace and Justice in North-East Asia: Prospects for Peaceful Resolution of Conflicts,’ convened by the WCC in October 1984, near Gotemba-city, Japan.

“Despite its deliberately generic title, this consultation was the expression of efforts to put the challenge of peace and reunification of the Korean peninsula on the international ecumenical agenda and to promote dialogue between North and South Koreans.”

He also related how in 1985, the first official direct ecumenical contact with the Korean Christians Federation from North Korea was established during a WCC senior staff delegation visit to Pyongyang.

He explained how the WCC strongly supports the political steps towards dialogue and peace taken through the Panmunjom and Singapore Summits.

“The WCC Central Committee at its meeting in June 2018 acknowledged how closely the commitments expressed in the Panmunjom Declaration match the key focuses and objectives of over three decades of ecumenical advocacy for peace and reunification of the Korean Peninsula,” said Prove.

The conference also had input from Youngkyo Ah, a UN human rights officer, Jonathan Woolley, director of the Quaker UN Office in Geneva, and Daniel Gerster from a Swiss farming family who lived in North Korea and worked on a farm in the country.