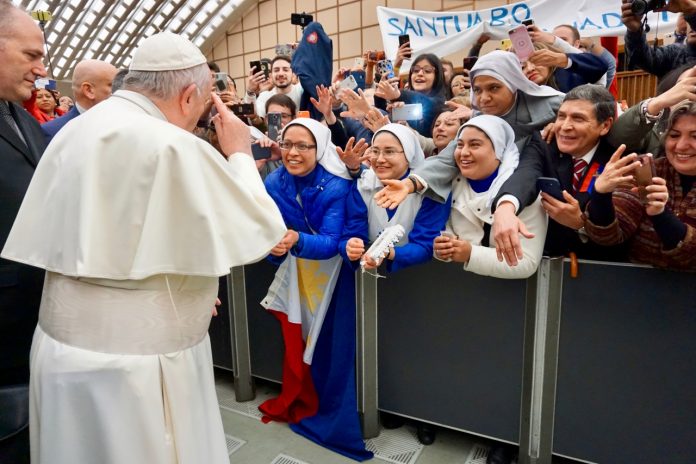 Pope Francis spoke Friday about how the Gospel message must be based in concrete reality, through which Christ himself communicates to the world.

“Listening is letting ourselves be struck by reality,” the pope said at the Vatican Dec. 6, in an address to staff of the Jesuit Italian-language magazine Aggiornamenti Sociali.

“What is the response of a Christian?” he said: “Having a dialogue with that reality starting from the values ​​of the Gospel, from the things that Jesus taught us, without imposing them dogmatically, but with dialogue and discernment.”

Francis pointed to what he characterized as a return to populist ideology in Europe, similar to those ideologies which led to the Second World War.

Why is this happening? he asked. “Because you do not listen to reality as it is. There is a projection of what I want to be done, what I want to think about…”

“It is a complex which makes us replace God the creator,” he stated, adding that people want to put filters on reality, or to shape it into what they want it to be.

“But reality is another thing. Reality is sovereign,” he argued. “I have to dialogue with reality.”

Pope Francis gave his remarks on reality and evangelization “spontaneously,” during the meeting with magazine staff. He would have his prepared speech distributed to be read “academically,” he said.

He encouraged listening “with an open mind and heart, without prejudice” as “the first step” to evangelization.

The pope also told the magazine staff to “never cover up reality” but to tell it as it is and then try to make sense of it through interpretation in dialogue with God in prayer.

“You must understand it. And then dialogue with the Gospel, with the Christian message; prayer, discernment, and so make small paths to move forward,” he urged.

Today, he underlined, there is no “highway” to evangelization, but only “humble paths.”

Francis also encouraged people to not to be afraid of making mistakes, knowing that if they fall, it is an opportunity to thank God, rise again, and continue.

“But one who does not move for fear of falling or slipping or making mistakes, never, will never be fruitful in life,” he said. “Go forward, bravely.”

On the topic of criticism, Pope Francis said if it is good it provides an opportunity for growth, whereas criticism that comes from a “bad heart,” on the other hand, may make you “dance” with fury.

But he encouraged Catholics to “always keep inner freedom.” He noted that only the person “who prays, who puts himself before God, who carries the Gospel” can keep his or her inner freedom.