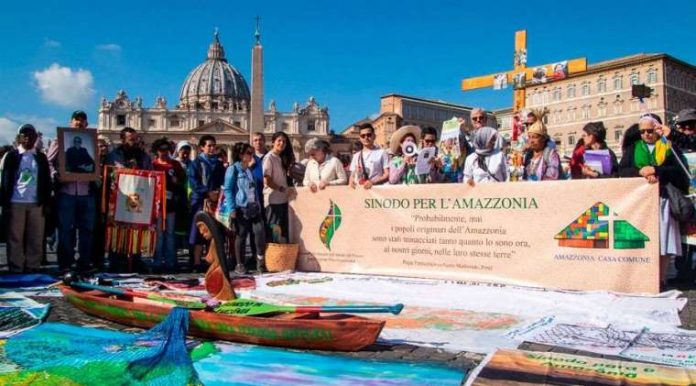 An “Amazonian Stations of the Cross” was prayed outside the Vatican Saturday, organized as part of a set of semi-official events connected to the Vatican’s Synod of Bishops on the Amazon.

The “Via Crucis Amazonico” Oct. 19 was held as part of the “Casa Comune” project, an initiative promoting more than 115 events hosted by a loose network of groups, connected in varying degrees to the Catholic Church.

The Saturday Stations of the Cross were attended by people indigenous to the Amazon region and their supporters, along with religious, priests, and bishops participating in the synod on the Amazon, an Oct. 6-27 Vatican meeting of bishops called to discuss the Church’s pastoral ministry in the Amazon region.

Among the participating bishops were Cardinal Pedro Barreto, Archbishop of Huancayo and vice president of the Ecclesial Network of Panama (REPAM) – the principal organizer of the Casa Comune project, along with Bishop Roque Paloschi , Archbishop of Porto Velho and president of the Indigenous Missionary Council (CIMI) – another one of the organizations sponsoring the Casa Comune initiative.

The Stations of the Cross, like most of the events organized by the Casa Comune project, included both traditional Christian symbols and the use of symbols and images derived from the culture of indigeneous Amazonian groups.

The Way of the Cross began near the Castel Sant’Angelo, roughly one kilometer from St. Peter’s Square, and concluded outside St. Peter’s Basilica.

Participants carried objects symbolic of Amazonian culture, among them a large canoe, bowls with food, indigenous musical instruments, along with the controversial, and now familiar, image of a naked pregnant woman, which has been described variously as a Marian image, as an indigenous religious symbol of Pachamama, or Mother Easter, or as a symbol of life.

As the stations began, participants placed on the ground the canoe, the image of the woman, and photographs of the “martyrs of the Amazon,” among whom was Saint Oscar Romero, the only one of the persons represented who has been canonized by the Catholic Church.

After initial chants, the meaning of the celebration was explained: “Remember the martyrs of the way, the lives given by the Kingdom of life. We also remember our lives, the joys and hopes that brought us here, and the sadness and anguish of our people of Panamazonía and the earth. ”

Then, the smoke of some plants that burned in a bowl was spread among the attendees with a feather.

After this initial ceremony, the “Way of the Cross” itself began with its 14 stations, plus an added 15th station dedicated to the resurrection. A large wooden cross, in which a rosary and photographs of the martyrs were nailed, headed the entourage.

The 14 stations were adapted from the traditional Stations of the Cross, and each station was accompanied by a phrase or theme: “human rights,” “the great projects of ‘development’ in the Amazon Basin,” “reconciliation,” “encounter,” “the cultures of Panamazonía,” ” a call for all,” “ the destruction of nature,” and others.

At the end of each station, a different person read a brief reflection. Among the messages that were conveted was thatt “Mother Earth weeps for the excessive exploitation that is committed in the 9 countries of the Panamazonía.”

Forgiveness was also requested “for the mistakes made as a Church and as humanity; especially through of the abuses of colonization, the systematic violence to human rights and the ethnocide carried out of so many peoples throughout the continent.”

One reflection warned that “scientists and environmentalists presage darkness and shadows of death for our land if we do not stop the indiscriminate use of resources.” Therefore, “the call as Church is to announce the Gospel of Jesus and denounce the abuses that Sister Mother Earth experiences.”

Upon arriving at St. Peter’s Square, while meditating on the final station, some participants lay on the ground, upon the photographs of the so-called martyrs of the Amazon, pretending to be dead. At the end of the 15th station, dedicated to the Resurrection, the people lying on the ground rose, conveying resurrection from the dead, and raising their hands to heaven in thanksgiving.

Finally, one woman’s face was painted with Amazonian signs, and adorned her with a crown of feathers, and then raised overhead in a canoe, amid songs and applause from participants.