A female police inspector identified only as Jeyalakshmi and five police officers on Oct. 6 entered the house where Christians were spending the evening in praise and worship in Aralvaimozhi, Kanyakumari District, the pastor said.

“Inspector Jeyalakshmi and five policemen rushed inside the house church and started abusing me in filthy language,” Pastor P. Yesudas told Morning Star News. “My wife and the believers asked her, ‘What is our fault? Why are you abusing us?’ But she came after them, and the constables who were accompanying her also started punching with their fists.”

Jeyalakshmi held Pastor Yesudas by the neck and struck him in his stomach and back, he said.

“My wife and the believers tried to protect me, but they were also injured,” he said. “We did not know what to do and tried to phone call pastors from neighboring areas.”

Pastor Satyaseelan, who goes by a single name, told Morning Star News he hurried over to Aralvaimozhi from Anjugramam in 10 minutes after receiving a call from Pastor Yesudas.

“Pastor and his wife were injured and howling in pain,” Pastor Satyaseelan said. “Chairs and Bibles could be seen thrown aside. One of the constables was manhandling the believers while Jeyalakshmi continued abusing in foul language. I can’t repeat those words. She was raging in anger.”

Satyaseelan and other Christians submitted a petition to the district’s superintendent of police and the district collector with the help of senior pastors, but no action has been taken against Jeyalakshmi and her subordinates, he said.

Police officials in Kanyakumari are under the control of a Bharatiya Janata Party (BJP) leader elected as the member of Parliament from the district, said a local source who requested anonymity.

Another pastor in Kanyakumari District reported that police tried to arrest him the third week of October on baseless charges.

“All of a sudden, on the road, they surrounded me and asked me to go to the police station with them,” Pastor C.J. Zeba told Morning Star News. “I screamed for help, and my friends who are also pastors and an audible distance away came running, and the police went away.”

On Oct. 21, he added, police warned a local pastor leading worship in a house church that he must stop all Christian activities within 10 days, or else he would be arrested.

“It is very disturbing that police are misusing their power,” Pastor Zeba said.

“The police are not worried at all to protect the fundamental rights and ensure the safety of citizens, instead they are openly going after Christians, disrupting their private prayers. It is all happening under the supervision of RSS and BJP supporters in the local government,” he said.

ADF-India is actively engaging with the local Christians and Christian leaders in Tamil Nadu state to raise awareness, help them know what to do when their basic rights are denied and ensure that doors for the gospel are open, Christie said.

ADF, which undertakes legal advocacy for religious freedom, notes in its campaign celebrating the 70th anniversary of the U.N. Universal Declaration of Human Rights that it is sadly ironic that Christians are persecuted in India, a country with a long tradition and legal framework of freedom of religion.

Article 18 of the U.N. declaration asserts that believers have the freedom to practice their faith “in teaching, practice, worship and observance,” ADF notes in its campaign to obtain signatures supporting the Geneva Statement on Human Rights at www.ImHumanRight.org. 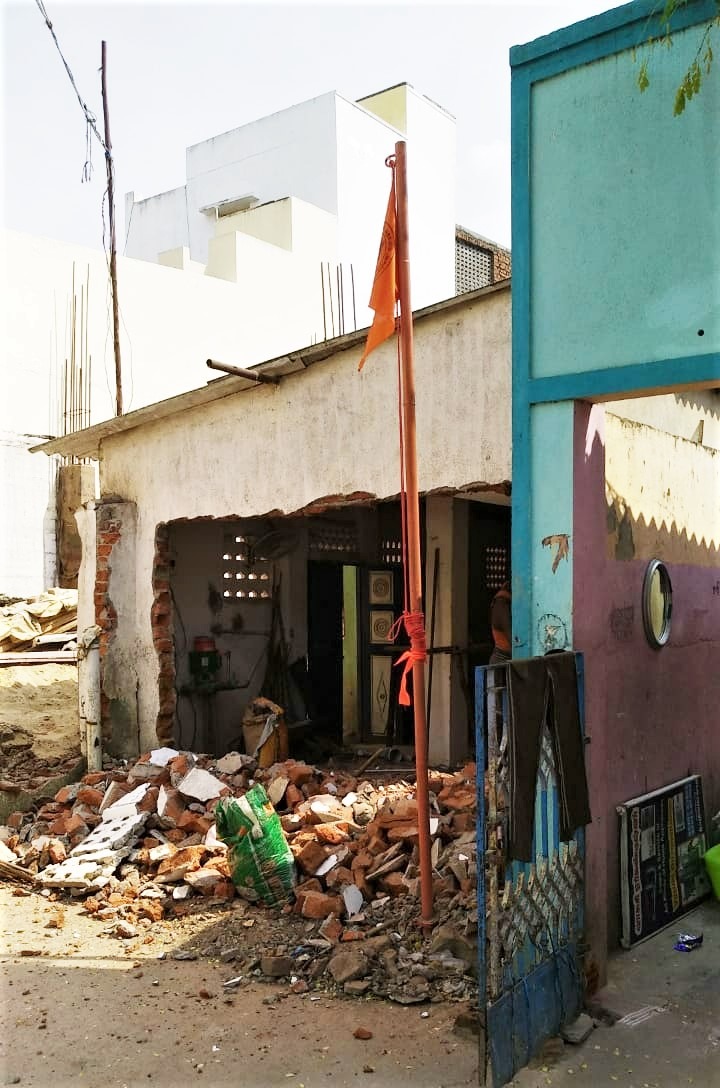 In Chennai, capital of Tamil Nadu, police on Oct. 7 disrupted a Sunday worship service alleging that they received complaints against the congregation.

“Police suddenly entered the shack we had built for temporary use to gather for prayers on the site of our church building which is under construction at present,” Pastor John Immanuel of Believers Prayer Fellowship told Morning Star News. “They told us that neighbors are disturbed by our singing and praying. I told them that the noise levels are always under control, and that we have been worshipping for the past two years, and the neighbors never raised any such issues.”

“Uma Mageshwari is a neighbor who has close links with RSS,” Pastor Immanuel told Morning Star News. “About a week before police came, RSS activists had put up a pole in the church premises and attached a saffron flag to it. They refused to remove it, and we informed the police. They [RSS activists] kept watch of our coming and going every day. They still do.”

Koyambedu police ordered Mageshwari and her aides to remove the flag immediately, but they protested. They removed it only after police threatened to file charges against them, the pastor said.

“We are trying hard to complete the construction so that at least we can gather inside the building, and not in an open shack,” Pastor Immanuel said.

In the Sarvanampatty area of Coimbatore District, Christians at Flock of Jesus Prayer Centre were praying when a police officer entered the building and told them that the police commissioner had sent him to investigate.

Pastor Kalai Selvan said that on Oct. 2, his church arranged a special meeting to which friends and relatives were invited, and at least 350 people joined his congregation of 30 to 40 members to celebrate the one­-year anniversary of the prayer center. A policeman identified only as Marimuthu entered the church at about 4 p.m., he said.

“He told us that he came from the commissioner’s officer to conduct enquiry,” Pastor Selvan told Morning Star News. “He clicked photographs of the congregation, structures and also the sign board with the prayer center’s name. Within 30 minutes, the landlord of the building received a call from the police station questioning why he had rented the place for Christian worship.”

Another officer identified only as Ranganathan arrived at the worship site four days later, Oct. 6, saying he had been sent to investigate a complaint that the church was causing noise pollution and disturbing neighbors, Pastor Selvan said.

“I told him that only 30 to 40 of us use the hall to pray privately and do not play loud music or use microphones, and that we never caused trouble to neighbors,” the pastor told Morning Star News. “Ranganathan told us the police inspector at Sarvanampatty police station wants to see me.”

Pastor Selvan and his wife went to the police station, and the inspector told him to come back the next day with documents showing permission to worship at the site.

After seeking advice from legal advocacy group ADF-India, he returned to the police station on Oct. 8 with the lease agreement and a Madras High Court order clearly stating that private places of worship do not need permission from district authorities.

“I submitted the documents in the police station, and the inspector told me that the higher officials from the commissioner’s office had put pressure on him to conduct enquiry,” Pastor Selvan said.

In neighboring Puducherry, a former French colony settlement, a mob of Hindu extremists attacked Christians assembled for worship at a home the morning of Sept. 30.

A mob of Hindu Munnani members broke into Pastor Vincent Paul’s home at about 10:45 a.m. and began beating his family and the few friends who had joined them, he said. The assailants were identified as family members and close aides of Hindu Munnani leader Sanil Kumar, who lives just three houses away from Pastor Paul’s house.

“Kumar’s mother, Rani, bit my hand, and his followers broke the chairs and threw away the Bibles,” Pastor Paul told Morning Star News. “His wife, Dhanam, attacked my wife and children while the goons continued beating our guests and me. They brought media also to videotape the attack, and the news flashed in all local channels.”

When he went to the Orleanpet police station to report the attack, the inspector initially told him that Kumar was not in town and refused to take his complaint.

“Later, he warned me not to mess with Kumar and let it go,” Pastor Paul told Morning Star News.

The pastor received a phone call from Kumar at noon.

“He told me not to report, and that we can settle the matter amicably,” Pastor Paul said. “I asked him, but why did you attack us? What did my wife and small children do that you sent goons to beat them? He said he apologizes for what happened but asked me not to make any complaint against his family or his men.”

The pastor told Kumar he would agree not to report the attack on the condition that the Hindus would not disturb any more worship services.

“This did not go well with Kumar,” he said. “He told me that he would go as far as killing me and my family but will not allow Christian prayers in the area. I pleaded him that we are not more than 15 people, and that we gather only to pray and worship and have never caused any trouble in the area with our activities. He said, ‘Today you are 15, tomorrow you will become 50, and after some days you will be in hundreds.”

Kumar told him that he was the Hindu Munnani leader of the area, and that as long as it was under their control they would not allow any Christian activity, Pastor Paul said.

“My two children, ages 13 and 4, are afraid to step out of the house,” he said. “The goons surround our house day and night to keep a watch on us. We have no other option left but to sell away this house.”

Without freedom to worship in their own home, the family receives visits from other persecuted pastors who seek to offer them consolation, he said.

“It is depressing to see Puducherry become unsafe for Christians,” Pastor Paul said.

Life August 13, 2020
In a spate of Fulani militant attacks in July on predominantly Christian villages in southern Kaduna State, Nigeria, at least 121 people...

Church August 13, 2020
Theology in Germany, with a few exceptions, is in a crisis. This is the conclusion reached by a German theology professor, who...

At least 121 Christians dead in spate of savage Fulani militant...