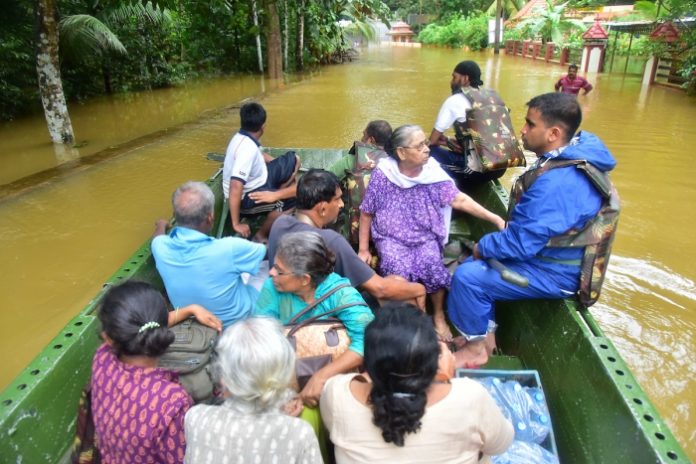 Even though flood survivors are displaced in some 2,000 relief camps across Kerala in south India, many of them observed the indigenous Malayali festival of Onam on 25 August in whatever way they could. The traditional festival, for thousands, carried an even more poignant meaning because the holiday celebrates the return of joy to the land: the story of the return of King Mahabali, considered to be a very kind and generous ruler, during a “golden period” in Kerala.

Onam was observed at relief camps currently being supported by the Kerala government and by faith communities of diverse denominations and traditions. Dozens of churches – too many to name – provided food for Onam dinners, and new clothes – or onakkodi – for elders.

People who did not lose their homes nonetheless arrived at the shelters, with food and supplies, to celebrate with their neighbors – neighbors who, before the flood, they may have considered strangers.

The small gestures of celebration – a faith in and hope of the return of joy – are only a small part of the relief offered by organizations, agencies and resident associations collecting funds, relief material and food including rice, lentils, sugar, clothes and toiletries. Appeals over social media are raising tens of thousands of dollars a day. Hindu, Christian, and Sikh organizations, and people of good will, have opened their doors to stranded flood victims, and provided relief.

Weeks after floods forced thousands of people from their homes, families are returning to rebuild the ruins of their lives.

Kerala’s fisherfolk also have spent hours moving people to safety. Now, Kerala faces years of long-term recovery, as people return to assess damages to their homes and businesses. The risk of disease outbreaks is high, and local pastors are reporting that mental trauma continues to challenge people who have experienced the worst disaster of their lives.

Kerala, the most southern state of India, is nicknamed “God’s Own Country,” is coping with one of the worst flood disasters in a century. The coastal state is home to 34.8 million people. Floods washed away hundreds of houses and submerged villages, killing at least 445 people and displacing about 800,000 to relief camps. Government estimates on 26 August indicated 50,000 homes may have been destroyed.

The National Council of Churches in India has made an appeal to all people of God to assure the people of Kerala of their prayers and accompaniment at this time of trial and experience of crossing the valley of darkness.

“Dear people of God, we the National Council of Churches in India appeal to all our members and partners to share your resources with the people of Kerala, especially food, water and clothes,” the appeal reads.

The National Council of Churches of Christ in the USA (NCC) also expressed its grave concern for the people of Kerala. “The NCC and all of our member communions mourn the loss of life, and we pray for the recovery of Kerala as the survivors begin the work of restoring their homeland,” reads an NCC statement.

Dr. Mathews George Chunakara, general secretary of Christian Conference of Asia, offered condolences to the bereaved families and expressed solidarity with the affected people experiencing colossal damage in their lives due to the disaster of this magnitude.

He urged all CCA member churches, as well as churches and ecumenical organizations around the world, “to pray for and express solidarity with the affected people in Kerala, and also respond urgently to this humanitarian disaster.”