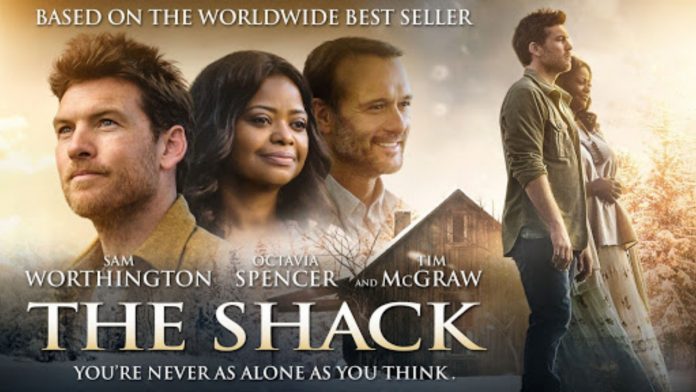 In 2008, William Paul Young wrote a book titled The Shack that was instantly a best-seller. It ascended to the top of the best-selling lists (including the New York Times and Amazon), and like many successful books often do, it has now morphed into a movie. The book originally written as a Christmas gift for a family has sold over 20-million copies and become one of the top 70 books in the history of printed books.

Recently the trailer for the movie based on Young’s book was released. The movie itself is set to be released in 2017, but the hype and anticipation has already started to build. That’s to be expected when you have people like Eugene Peterson making statements such as, “This book has the potential to do for our generation what John Bunyan’s “Pilgrim’s Progress” did for his. It’s that good!” To be honest, the trailer for the movie was greatly appealing and demonstrated a high quality that will likely be very successful. Why should Christians be concerned? What lessons can be learned from the success of The Shack that might help us all moving forward?

My publisher is giving away brand new copies of The Shack movie edition in their holiday book package! Enter for a chance to win here: http://gvwy.io/zbhjcmw.

A Word About the Book—The Shack

The book itself demonstrates the fact that William Young is a good writer. Through the use of written language, Young captivates the reader with masterful descriptions of mysterious theological subjects and doctrines. This is always a wonderful way to teach the Bible and has long been employed by men like John Bunyan and C. S. Lewis, but in the case of The Shack, the teaching is sub-par, or to use the language of Albert Mohler in his review of the book back in 2010—”sub-biblical.”

The book is based on the story of a man named Mackenzie (goes by Mack) and his encounter with the godhead following a horrible tragedy where his daughter (Missy) was brutally murdered in an old shack after being abducted during a family vacation. Although Young tackles some very difficult subjects related to human tragedy, in his attempt to point people to God, he instead points people to an African-American woman named Papa (who transformed at one point into a gray-haired man), a middle-aged man named Jesus who was of a Middle-Eastern descent, and a small woman of Asian descent named Sarayu. This is where things derail from the biblical theology tracks in an epic train wreck.

Like many books that become popular in evangelicalism (such as Heaven is for Real), when people are captivated by the emotion of hardship or tragedy, they’re often willing to accept the false teaching that walks through the open gates of their heart like a Trojan horse. Although William Young is a gifted communicator, what he communicates about God in his book The Shack is simply not true and it’s heresy. Therefore, no matter how his skill is with the English language and his ability to captivate his audience, if what he speaks isn’t true and if it violates the God of holy Scripture, we must avoid it. Although the movie can’t be reviewed, what can be accurately predicted is that no matter how well the acting and production of the movie is—the stench of heresy is already detectable from a distance.

A new version of The Shack book was released today with wonderful color pictures from the set! Look for The Shack movie in theaters March 3rd!

A Call for Christian Discernment

Heavenly tourism books have become widely popular within the evangelical community in recent years. It seems that if one wants to be successful in the area of fiction and non-fiction, if a story can be captured about a person’s trip to heaven (or in this case – to a shack) where he or she interacts with God and returns to tell the vivid story with eye-popping details, it’s a sure recipe for success. This is a lamentable fact, and one that the evangelical church must come face-to-face with (Prov. 15:21).

As the psalmist declared in Psalm 119:66, we as God’s children should long for clear, controlled, and robust discernment. Since the Scriptures are God’s Word and the church is “a pillar and buttress of truth,” we must be able to “guard the good deposit” that has been entrusted to us (1 Tim 3:15; 2 Tim. 1:14). Therefore, laziness when it comes to biblical truth has no place in the church of Jesus Christ. There’s no reason a book like The Shack should find its way to the top of best-selling lists by the help of the Christian community.

Remember Papa's great love for you.

Posted by The Shack by Wm Paul Young on Wednesday, October 5, 2016

Lessons to be Learned

Early in 2016 I was preaching in a conference held on the campus of a large Southern Baptist Church. Between sessions, I was given access to their library and coffee shop area where I could read and pray. As I browsed around the bookshelves, the paradox of evangelicalism was apparent on the shelves of this church’s library. On the same shelf separated by just a few books were two very different books by two very different authors—Sara Young’s Jesus Calling and Paul Washer’s The Gospel’s Power and Message. This is where we are as evangelicals, so long as Jesus’ names is used or the title contains Christian vocabulary, it’s readily received and granted access to the local church’s library.

Lessons to be learned from The Shack and other heavenly tourism books that fall into this same category are numerous. There are far too many lessons to learn than I have time and space to mention, but one noteworthy lesson is—doctrine matters. If we attempt to teach the Bible with stories, illustrations, anthropomorphism, and humor, that’s wonderful, but those stories, illustrations, anthropomorphisms, and humor must be communicated with theological precision. We don’t want a surgeon operating on us who has been guilty of medical malpractice, and that same principle is true when it comes to those who teach us the Bible.

In one scene, Jesus poked his head into the dining area to inform Papa that he had put the tools they would need just outside the door. Papa thanked Jesus, who kissed him on the lips and left out the back door. Where do we ever see Jesus informing the Father of anything in the Bible? In another scene, Jesus communicates the following to Mack:

Papa is as much submitted to me as I am to him, or Sarayu to me, or Papa to her. Submission is not about authority and it is not obedience; it is all about relationships of love and respect. In fact, we are submitted to you in the same way.

Love is a choice!

If that’s not bad enough, Jesus goes on to communicate another ancient heresy to Mack by saying, “Those who love me come from every system that exists. They were Buddhists or Mormons, Baptists or Muslims, Democrats, Republicans and many who don’t vote or are not part of any Sunday morning or religious institutions.” Jesus continues by saying, “I have no desire to make them Christian, but I do want to join them in their transformation into sons and daughters of my Papa, into my brothers and sisters, my Beloved.”

Mack responds to Jesus, “Do all roads lead to Christ?” Jesus then provides an answer that points to universalism—“Most roads don’t lead anywhere. What it does mean is that I will travel any road to find you.” The answer to Mack’s question is an obvious rejection of verses such as John 14:6 and Acts 4:12 that teach the absolute exclusivity of Christ. Jesus doesn’t travel down the road of Mormonism to find people. Sure, Jesus can find lost sinners anywhere, but to suggest that “those who love” Jesus come from every system that exists is a tragic error. To communicate that Jesus doesn’t want to make anyone a Christian is a tragic mistake, and to teach people that Jesus wants to “join us” in our transformation into sons of Papa is a reversal of roles. Jesus is sovereign and we respond to Him. We love because He first loved us (1 Jn. 4:19). This book, although celebrated by many Christians is an anti-Christian book and will subsequently become an anti-Christian movie.

One final take-away that we must learn from such books and movies is that God has one primary method of delivering His revelation to us and it’s through holy Scripture. To bypass the Bible and learn about the Trinity through The Shack is to do yourself a great injustice and the results will be catastrophic. God has a proper and fitting revelation of Himself, and He has unveiled that glorious revelation in the pages of sacred Scripture—not The Shack or any other book like it. Ancient mysticism has crept back into the church in our day, and unfortunately it’s widely popular. Why not just come to know God, true Christian theology, and a proper response to the deepest human suffering by reading God’s book—the Bible?

Live in his presence today!

Indictments to be Received

The success of The Shack is a true indictment on the shallowness of mainstream evangelicalism. The church is not only called to evangelize the world with the gospel, she is also called to have biblical discernment. That lack of concern when it comes to understanding the Bible and the core essential teachings of Scripture among many evangelical Christians should bring about great concern. When bookstores, even Christian bookstores, are willing to peddle books like The Shack and other sub-Christian titles, we should be greatly concerned. Albert Mohler writes:

The Shack is a wake-up call for evangelical Christianity…The popularity of this book among evangelicals can only be explained by a lack of basic theological knowledge among us — a failure even to understand the Gospel of Christ. The tragedy that evangelicals have lost the art of biblical discernment must be traced to a disastrous loss of biblical knowledge. Discernment cannot survive without doctrine.

A further indictment must be centered on the pulpit in the evangelical church today. Christians, if taught properly each Lord’s Day from the pulpit, would detest such books as The Shack. If robust teaching was the common diet, books like The Shack would be so unsuccessful that a movie producer wouldn’t give it a second thought—because in his mind he needs the evangelical church to buy tickets to watch it. Therefore, when the pulpit is shallow, dysfunctional, and sub-Christian—you can expect the people to crave that same type of entertainment.

What would it look like if we lived this way?

Pastors guard your people by telling them the truth. Brothers and sisters in Christ, please make the movie version of this heretical book far less successful by staying home.