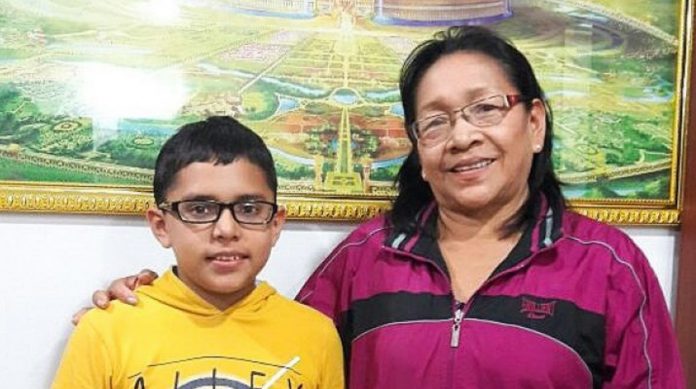 My 9-year-old grandson, Pablo Sales was diagnosed with hemophilia. It is a disorder that impairs the body’s ability to make blood clots to stop bleeding. It is caused due to lack of clotting factors.

One day, Pablo hurt his arm in a bike accident. I was really worried because bleeding caused by broken veins and capillaries could cause him to lose his arm.

Thankfully, God protected him in the accident. But we were always afraid that he might lose a body part or die once he started to bleed. We could not live in peace due to such fear.

In July 2016 Rev. Heesun Lee, Manmin World Guidance Pastor, visited Peru Manmin Church to lead its 10th anniversary service and a healing meeting with the handkerchief on which Senior Pastor Dr. Jaerock Lee had prayed (Acts 19:11-12). We had witnessed many people experiencing healing through the handkerchief prayer. Pablo and I attended the meeting with longing.

I had earnest longing because Pablo had received a serious injury to his leg around that time. He received the handkerchief prayer and we went back home. He was doing fine as if nothing had happened.

Next day, I checked his legs. A severe bruise he had had was gone, and the symptoms caused by lack of clotting factors all disappeared. He was completely healed of hemophilia. Hallelujah!

When my grandson experienced the power himself, my faith increased more and I became really happy. My family became evangelized through Pablo’s healing. I give all thanks and glory to God.