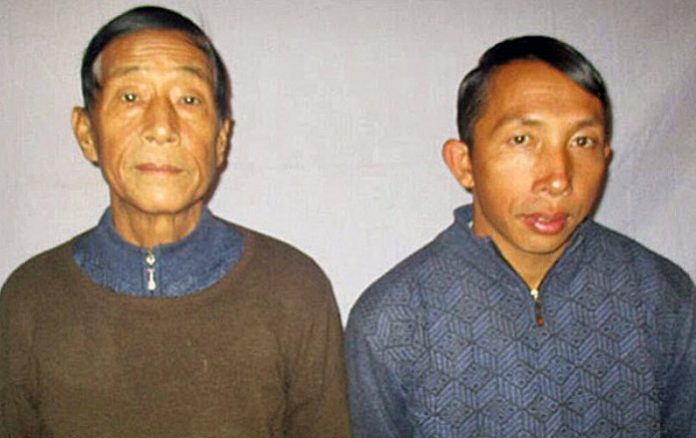 YANGON, Burma (Morning Star News) – After spending more than a year in prison, two assistant pastors arrested by the Burma (Myanmar) army were freed on Tuesday (17 April) under a government amnesty program.

Dom Dawng Nawng Latt, 65, and La Jaw Gam Hseng, 35, were among more than 8,500 prisoners granted amnesty by newly elected President U Win Myint, sources said. Some 37 jailed political activists were also freed under the amnesty, but most of those freed were in prison on drug-related and other crimes.

“They were freed around 4 p.m. yesterday, and they are on their way back home,” he said. “We are happy that they were freed, but they spent one year and five months in prison. It is not good for them, their family and even for the convention. They were arrested for being suspicious and sentenced into prison. It was a waste of time, and it was not fair.”

Pastor Zau Ra said they are in good health.

“It is important that respective authorities make sure that this wouldn’t be happening in the future, as we are in peace-building process,” he said. “This would harm relationship and trust- building between the government and civilians.”

On Oct. 27, 2017, Pastor Nawng Latt was sentenced to a prison term of four years and three months, and Pastor Gam Hseng two years and three months, under Burma’s Unlawful Association Act, for alleged connections with an ethnic armed group, the Kachin Independence Organization (KIO), and for allegedly spying for it, according to sources in court in Lashio town, Shan state.

Area sources, however, said they were likely arrested and charged for speaking to media and helping local journalists cover the bombing of a Catholic church building, a house and schools in Shan state in November 2016. The army arrested them on Dec. 24, 2016 when they went to Byuha Gone military base to negotiate release of a civilian couple who had complained to army officials about the destruction of their house, sources said.

The two pastors reportedly took local journalists to take pictures of the damaged St. Francis Xavier Catholic Church building, which had been bombed by Burma army jets. Pastor Nawng Latt was prosecuted under a defamation statute. They deny the charges, which colleagues say are baseless.

A Burma army prosecutor, Maj. Kyaw Zin Htun, took legal action against the two pastors after news and photos about the army attack on the church building were published. Burma army officials also told a journalist to delete photographs of the damaged structure.

Human Rights Watch and other international rights group had called for their release, saying the pastors were being prosecuted for helping to expose military wrongdoing in violation of international human rights norms. Their plight came to light after Morning Star News reported on Dec. 29, 2016 that they had gone missing.

Burma is about 80 percent Buddhist and 9 percent Christian. The government has recognized the special status of Buddhism in Burma. It is ranked 24th on Christian support organization Open Doors’ 2018 World Watch List of the countries where it is most difficult to be a Christian.