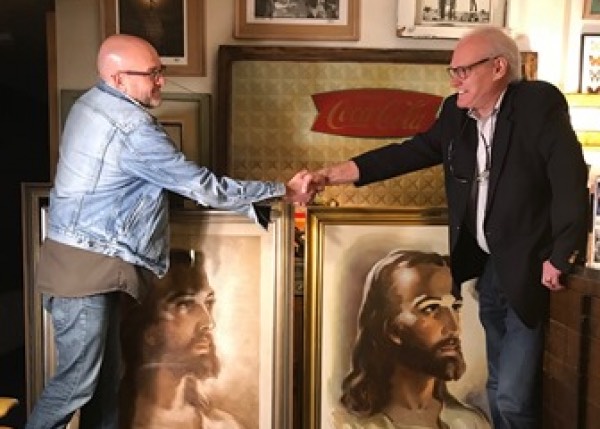 CHICAGO, IL (ANS – July 9, 2018) – Christian author and biographer, Jerry Jenkins, perhaps most notably known for The Left Behind series of End Times novels, has a special connection with one of the most recognized pieces of art in the world, and recently acquired an original copy in a unique way.

Reproduced more than a billion times on prayer cards, candles, stamps and just about anything else you can think of, Warner Sallman’s 1940 painting the “Head of Christ” has shaped generations’ perception of Jesus Christ.

Local Chicago photographer Paul Beaty found two rare originals – one in oil and one in chalk – inside a Chicago thrift store in early 2016. WTTW-TV’s “Chicago Tonight” reporter Jay Shefsky highlighted the incredible find in a story earlier this year.

Since then, Beaty has sold both pieces to Colorado-based author Jerry Jenkins for $135,000. The two connected after Shefsky’s story aired in February.

“It’s unbelievable actually,” Beaty said in a phone interview Thursday. “I had so many people tell me there’s no way that you could (sell these).”

An online article by Matt Masterson said the freelance photographer has made a hobby out of going to garage sales and flea markets for years, always on the watch for interesting pieces of Americana. But it was inside a Chicago Salvation Army thrift store in February 2016 when he stumbled across the Stallman artworks.

“I walked in and couldn’t believe something like this would be in the Salvation Army,” he previously told Shefsky, recalling how, as a child, he would space out in school and stare at a “Head of Christ” reproduction hanging in his classroom. “I knew they were originals from across the room, but I didn’t know how rare they were until I started Googling.”

The online article says Beaty worked to find a buyer over the next two years, going through art brokers and contacting museums about possible sales, but nothing came through until one of Jenkins’ relatives saw the Chicago Tonight piece on Facebook after it aired in February and contacted him about the pieces.

Jenkins said he’s had a strong connection with Sallman’s artwork since he was a young child.

“My mother led me to Christ at age six when I asked about the famous Warner Sallman Christ Knocking at the Door print hanging on our wall,” he told ASSIST News Service (www.assistnews.net ).

“Fifteen years later, when I married Dianna, I learned her grandfather was also an artist, a close friend of Sallman, and that they lived in the same building and attended the same church.”

Jenkins has written more than 180 books, including profiles of Chicago Bears legends Walter Payton and Mike Singletary, and has also served on the board at the Chicago-based Moody Bible Institute for nearly two decades.

His family has other ties to the Chicago area: Jenkins’ father, Harry, served as police chief in Elk Grove Village for more than a decade in the 1960s and ‘70s. Jenkins himself previously worked as a stringer for a suburban daily newspaper, starting off as a teen – just as Beaty did at the Daily Herald.

“It just sort of seemed like destiny that we felt such a connection to the story and to the painting,” Jenkins said.

After Beaty found the pieces in 2016, Sallman expert Leroy Carlson appraised the oil painting at $100,000, and the chalk drawing at $35,000. And that’s exactly how much Jenkins purchased them for.

The two hammered out the deal and signed a contract inside Beaty’s Chicago home earlier this month.

“I’ve had so many people tell me there’s no way that I can sell it on my own without an art broker or an auction house,” Beaty said. “And they also told me it wasn’t worth the appraisal price. No original Warner Sallman (piece) had ever been sold, so a lot of people didn’t think it was worth that much.

“This sets the value of what an original Warner Sallman is worth now.”

The oil painting, believed to be one of only five such pieces Sallman made, had hung for years inside Salvation Army’s buildings in Minneapolis and Des Plaines.

Jenkins said his son will drive the artwork out to Colorado next week. He plans to hang the oil painting in a building next to his home where he does his writing.

As for the chalk, Jenkins is considering donating that down the road, either to a Christian institution or possibly even back to the Salvation Army.

“They’re kind of the odd man out here,” Jenkins said. “We’re just grateful to get them and pretty excited about it. I can’t wait until we get them out to our place.”

About the Writer: Michael Ireland is a volunteer internet journalist serving as Chief Correspondent for the ASSIST News Service, as well as an Ordained Minister, and an award-winning local cable-TV program host/producer who has served with ASSIST Ministries and written for ANS since its beginning in 1989. He has reported for ANS from Jamaica, Mexico, Nicaragua, Israel, Jordan, China, and Russia. You may follow Michael on Facebook at https://www.facebook.com/MichaelIrelandMediaMissionary , and on Twitter at @Michael_ASSIST. Please consider helping Michael cover his expenses in bringing news of the Persecuted Church, by logging-on to: https://actintl.givingfuel.com/ireland-michael