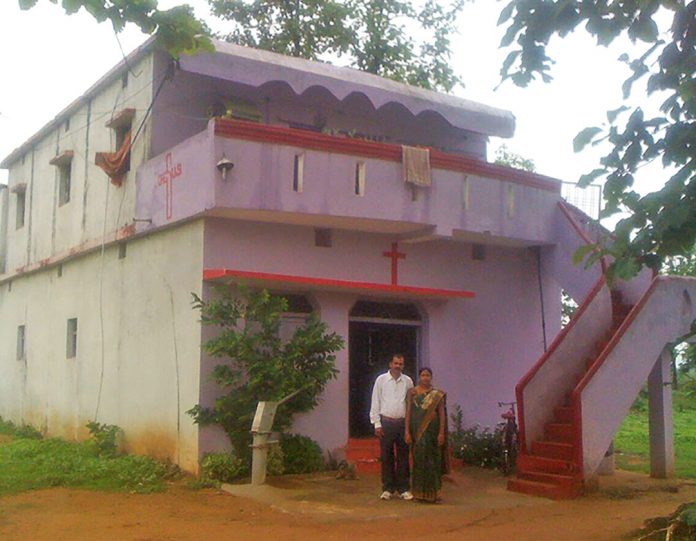 HYDERABAD, India (Morning Star News) – For 12 years Mahendra Nagdeve had met with friends and relatives in his house in Madhya Pradesh state, India to worship Christ until he received this notice from city officials this month:

“With effect from the moment you receive this notice, you must not conduct any Christian congregational activity,” the notice read, translated from the Hindi. “If you continue any Christian activities despite receiving the notice, stringent action will be taken against you.”

No official from the Nagar Palika Balaghat municipality had visited to give the 45-year-old father of three any indication that Christian activities in his home in the Lanji area of Balaghat District were problematic, he said. The activities included Bible study with other families and his wife’s Christian women’s group.

The Nov. 8 notice came as a surprise.

“No officials visited my house to check if it is a house or church,” he told Morning Star News. “I have been paying house tax, electricity and water bills promptly. Unless for the purpose of issuing the bills and collecting any payments, the municipal employees had never contacted me, they never had an objection.”

He and his family attend a local church, but the former Hindu said that when he gave up idol worship 13 years ago, he also began worshipping Jesus Christ in his home with his family and other relatives.

“I immediately submitted a response to the municipal officials stating it is my own house where I live with my family, and I had been praying peacefully in this house for 13 years now,” he said. “Even my friends and relatives join us and we pray together.”

Just as Hindus in India allot a room used as a mandir (temple) in their houses, Nagdeve set aside a prayer hall within his home, he said.

“We constructed this house after taking prior permission from the municipal authorities in 2005,” Nagdeve said. “Our journey in faith continued, and my wife uses the prayer hall space to pray with women as a sisters meeting, and some families also gather with us to study the Bible, but I am not professionally a pastor.”

As a house, his home is not subject to the permissions required of a church building, he said.

“Our prayers have never been a disturbance to anyone,” he said. “We pray peacefully within the four walls of my house, and from my residence to as far as 200 meters there is not a single house or any construction.”

“The problem is when people apply for permission to construct a building, they don’t disclose the purpose, and we grant permission to only construct a house to live in it, but when the neighbors come to us with complaints, we must take action,” Bawre said.

Asked whether a family cannot pray together in their own home, Bawre said people in India are free to practice any religion. He acknowledged outside pressure to issue the notice.

“It was under the pressure by some people,” he said. “I issued the notice, but I did not take any action as yet. I will look into the matter soon.”

“They suspect Nagdeve forcibly converts Hindus, but it is not true,” the source said. “They should have enquired on this. The officials did not follow a protocol; it is clearly abuse of power.”

Nagdeve was frustrated in his own effort to contact the chief municipal officer.

“Despite calling the chief municipal officer’s chamber for appointment a number of times, I couldn’t meet him to submit my pleas,” he told Morning Star News.

Nagdeve did reach the municipal director, Mira Samrithey, telling her that his house was not subject to church building regulations/permits, and that his family studies the Bible and prays together in their home as anyone else does.

He said the municipal director told him, “The orders came from the senior officials, and we understand what the church activities are. When you’re granted the permission to construct a house, how can you conduct church services? Till you receive the permission to conduct church services, you must not use the building for worship and Christian activities.”

His attorney, Anil Maglani, told Morning Star News that the municipal authorities have interfered in the personal life of a citizen.

“We issued a notice to the municipal officials saying they are exploiting the religious beliefs of Nagdeve,” Maglani said. “What’s happening in his house, and which God he prays to inside the house, and whom he is praying to is totally personal, and no authority should intervene in this matter.”

The attorney said his team will take court action if necessary, but that thus far they have only asked for a legal basis for stopping people from praying in their house.

Another attorney who requested anonymity said there is no legal basis for stopping worship inside a house in India.

“Constitutional courts have issued judgments in the past clearly saying that if any gathering is happening inside a person’s home for any Christian activity, they need not take any permission from anyone, because after the meeting that particular house will be used as a house,” he said. “It is not designated for that particular purpose alone. But when it comes to a church, there’s a definite purpose behind its construction; it is meant for some faith-based, religious activity. Whereas when a building or any space is exclusively used as a place of worship, the law mandates to obtain permission from the officials.”

Nagdeve said he has not met with friends and relatives for Christian activities since receiving the notice.

“There is strength in fellowship and meeting together of believers to pray and worship the Lord,” he said. “We glorify Him when we keep aside all the activities and spend time with Him regularly. The prayer hall is a part of my house, it is not a church, and I am not a pastor. In my own house, I am hiding and praying privately. Please pray for us.”

Since Prime Minister Narendra Modi took power in May 2014, the hostile tone of his National Democratic Alliance government, led by the Hindu nationalist Bharatiya Janata Party (BJP), against non-Hindus has emboldened Hindu extremists in several parts of the country to attack Christians, religious rights advocates say.