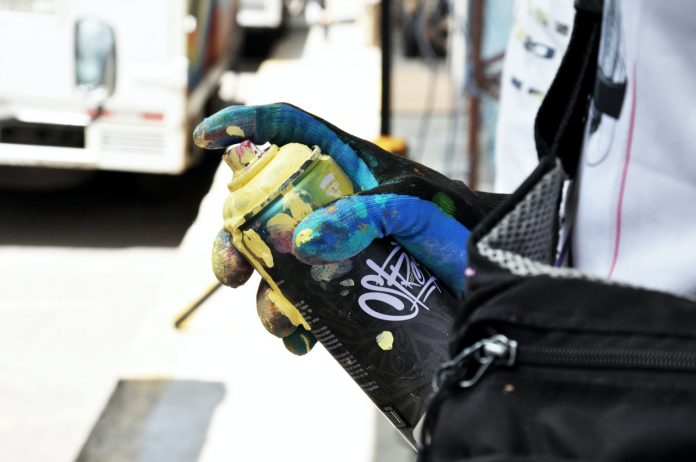 The Cathedral Basilica of the Immaculate Conception in downtown Denver was spray-painted with anti-Catholic slogans on Sunday, the latest in a series of vandalism incidents against Catholic buildings in Colorado.

Photos shared by local news reporters show slogans such as “Satan Lives Here,” “White Supremacists,” and “Child Rapists, LOL” written in bright red spray paint on the outside of the cathedral building, sidewalks, and on the base of a statue of St. John Paul II, who visited and stayed at the cathedral in 1993.

Father Samuel Morehead, the cathedral rector, said he was alerted about the vandalism by parishioners as they arrived to prepare for Sunday Mass.

Father Morehead told CNA that an eyewitness saw a person spray-painting the church around 7:45 am, in daylight, Oct. 10. Early indications are of a lone woman who carried out the attack, though police have not shared any information about persons of interest.

Father Morehead said police street cameras caught images of the person in the act, though he does not know if the footage is clear enough to make an identification.

The graffiti has since been cleaned off with the help of parishioners and other volunteers. The paint has been power-washed off the main doors, Father Morehead said, and a specialist is currently working to remove the paint from the cathedral’s stonework.

Father Morehead said the assailant seems to have some “deep personal wounds and grievances” against God and the Church, but “it remains to be seen” what the true motive for the crime was.

A spokesperson for Denver Police confirmed to CBS4 that the department is investigating the incident.

Archdiocese of Denver spokesman Mark Haas said since February 2020, at least 25 parishes or ministry locations in northern Colorado are known to have been the target of vandalism, property destruction, or theft.

“It continues to be troubling to see the increased reports of vandalism at Catholic churches, both across the county and in our archdiocese, and it is certainly unfortunate when our parishes are targeted simply because of our beliefs,” Haas said in a statement to CNA.

“We continue to pray for the conversion of those who carry out acts of desecration against our churches, statues, and religious symbols.”

The cathedral sustained serious damage in mid-2020 amid racially charged protests in downtown Denver. The church building and rectory were spray painted with the slogans “Pedofiles” [sic], “God is dead,” “There is no God,” along with anti-police, anarchist, and anti-religion phrases and symbols.

Gates surrounding the cathedral were damaged in those protests, tear gas that was fired to disperse the protests leaked into the rectory, and the outer doors to the cathedral sustained permanent damage. Three bags of rocks were collected from the parking lot, but the cathedral’s most valuable windows were unharmed. Other windows on the cathedral’s campus were shattered.

In June of this year, Holy Ghost Catholic Church, also located in downtown Denver, was tagged with red graffiti in a possible reference to the ongoing controversy over former Catholic-run schools for Indigenous in Canada, though the exact motive remains unclear.

In late August, the predominantly African-American parish of Curé d’Ars, located in north Denver, was broken into and robbed. All the church’s vessels used for Mass were stolen from the vestry, which the thieves accessed by kicking in a wooden door. The thieves also cut all the copper piping off of the building’s furnaces downstairs and from a stairwell on the building’s exterior, flooding the church basement with water.

The church’s tabernacle, containing the Eucharist, was stolen from the sanctuary. Some of the stolen items have since been recovered, but the Eucharist remains missing.

Last month, Sacred Heart of Mary Parish in nearby Boulder, Colorado, which is in the Denver archdiocese, was tagged with numerous spray-painted slogans including “Jesus [Loves] Abortion,” “Bans off our bodies,” “No Wire Hangers Ever,” and a symbol combining an “A” signifying “anarchy” and the traditional symbol for “female.”

The parish had a display of 4,000 small white crosses in its front lawn, each one representing a baby aborted each day in the United States. The vandals trampled and desecrated at least half of the crosses.

There have been at least 95 reported incidents of vandalism of Catholic churches across the United States since May 2020, according to a report by the U.S. Conference of Catholic Bishops’ Committee for Religious Liberty.

Incidents include arson, the destruction of statues, and the defacement of church buildings and gravestones with swastikas and anti-Catholic language.