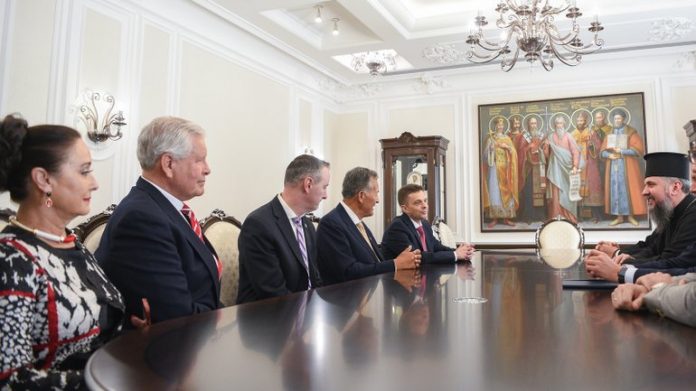 On September 9, at the Metropolitan House, the Primate of the OCU received members of the US House of Representatives who arrived in Kyiv to participate in the IX Prayer Breakfast.

This is reported by the press service of the Kyiv Metropolia of the OCU.

The meeting with Metropolitan Epifaniy of Kyiv and all Ukraine was attended by members of the US House of Representatives Committee on Foreign Affairs congressman from Pennsylvania (Republican Party) Brian Fitzpatrick, congressman from California (Democratic Party) Juan Carlos Vargas, former congressman of five convocations from Ohio (Republican Party) Robert McEwen and his wife Elizabeth, as well as deputy chairman of the OECR (Office of External Church Relations) Archbishop Evstratiy and advisers of the Kyiv Metropolia.

During the conversation, Metropolitan Epifaniy thanked the US parliamentarians for their consistent support of Ukraine in its struggle for independence, sovereignty and territorial integrity, as well as in carrying out the necessary reforms.

“As the largest religious organization in Ukraine, we, as a church, feel our special responsibility to Ukrainian society in helping to build a better state – Democratic, European, free from the sin of corruption,” the first hierarch said.

“Much has already been done, a number of important state institutions have been created that are designed to ensure the development of Ukraine as a truly democratic state, but much remains to be done – because lies, violations of the law, corruption are deeply ingrained in the state and society, and changing this state is a difficult task, but achievable, especially when there is friendly support from our partners,” he stressed.

US Congressmen stressed that the desire of the Ukrainian people to have an independent, geographically integral and modern democratic state has constant bipartisan support in the United States.

“We understand that some of the things that we have built in America over many decades of our history, you need to approve in a much shorter period, so we are ready to share our experience and help you,” said Congressman Fitzpatrick.

The meeting participants discussed a number of issues related to important reforms aimed at establishing the rule of law.

“The Church is called to bear witness to the truth and protect it, so we support judicial reform, anti-corruption measures and other important changes, without which Ukraine will not be able to achieve prosperity,” Metropolitan Epifaniy said.

The participants of the meeting agreed to continue cooperation, including through the opportunities for expert cooperation provided by the Mazepa Foundation created by the Kyiv Metropolia.