A lively conversation between former and current directors of the World Council of Churches (WCC) Commission of the Churches on International Affairs was a unique way to celebrate 75 years of the commission’s work.

Answering challenging questions, considering difficulties of the past, and candidly facing the future, those participating in the dialogue offered both a history lesson and a reckoning.

In his opening remarks, WCC acting general secretary Rev. Prof. Dr Ioan Sauca commemorated the creation of the commission in Cambridge in 1946, bringing, he said, “the prophetic witness of the ecumenical family into the field of international affairs.”

Rev. Dwain Epps, a former director, said that a major change in the commission took place in 1968 “when so many things were happening in the world and so many changes were occurring.”

At that time, there was a new focus on human rights and on a program called “Human Rights and Christian Responsibility.”

The commission, Epps said, “engaged churches in a global reconsideration of their role in a world wakening to the realities of racism and apartheid.”

The commission began to strengthen its role in addressing racial justice, and was, Epps said, “from the very beginning a partner of the Programme to Combat Racism, particularly in presenting the position of the WCC to the UN Human Rights Commission, to the General Assembly on a regular basis, and to keep the voices of the churches of the ecumenical movement in the forefront with the situation of apartheid in South Africa.”

Rev. Elenora Giddings Ivory, also a former commission director, made clear that some churches were—and still are—complicit in racism. The commission, she said, “was in a unique position to address that.”

Among churches and nations, Ivory said, “there was a perpetuation of systemic inequalities.”

There were churches, she said, “who do not even know our Bible and they don’t understand that the Bible tells us that we are all equally created in the eyes of God.”

Peter Prove, current director, offered a reflection on how the commission’s day-to-day operations have changed, saying “the world and therefore the ecumenical movement now face global challenges of an entirely different magnitude. Everything is connected.”

Currently, much of the commission’s advocacy work takes place in human rights forums, said Prove. “The UN has, in recent years, become increasingly open to partnerships with faith-based organizations and communities, and we have many good, engaged partners within the UN system.”

Prove also acknowledged that the UN has been weakened by rising populist nationalism as well as by its own failures. “But it is the best and the only instrument available for global cooperation,” he said.

Speakers also took questions and comments from the audience. Ivory responded to a comment in the chat box from someone whose church is dominated by elderly, white middle class males. “It’s reflected in our ecumenical movement, that kind of leadership,” said Ivory. “I would hope that we would take more time to dig deeper into what we read in our Bible and our understanding of what are the cultural restrictions that may be different than God’s restrictions. Does God have any restrictions based on our color, our status in life, or our gender? I would say no.”

Prime Minister signs the decree to prepare the transfer of St. Nicholas Church to the Roman Catholic community

Primate of the OCU meets with US Congressmen 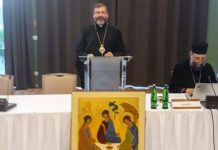