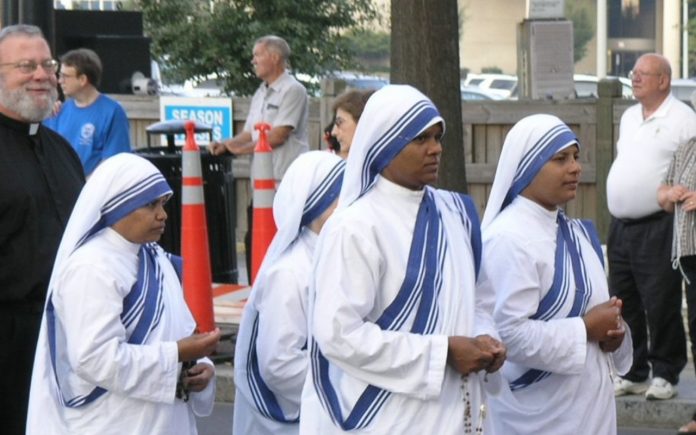 Hundreds of Missionaries of Charity gathered at their headquarters on Monday to commemorate the birthday of the order’s founder, Mother Teresa.

Archbishop Thomas D’Souza of Calcutta, whose birthday falls on the same day, celebrated Mass on Aug. 26 to recognize what would be the 109th birthday of Saint Mother Teresa.

“It was a splendid celebration. The 109th anniversary of the birth of our beloved Saint Mother Teresa was a moment of thanksgiving through prayer and joy,” said Father Dominic Gomes, vicar general of the archdiocese.

“The chapel was packed with people of all social origins,” he told Asia News.

The event was held at the Mother House of the Missionaries of Charity in Kolkata. After Mass, an estimated 300 nuns and novices gathered around the saint’s tomb and sang “Happy Birthday.”

Catholics normally commemorate the feast day of a saint – which often corresponds with the day they died – but the Missionaries of Charity have continued to celebrate Mother Teresa’s birthday as well, even after her death in 1997. During Mother Teresa’s life, her birthday had been a major celebration at the house.

The nuns told UCA News that they celebrate Mother Teresa’s birthday in all 700 of their homes across the world. The nuns will begin a nine-day novena on Aug. 27 in preparation for the saint’s feast day on Sept. 5.

“There can be no feast day without a birthday,” one of the nuns told UCA News. “So, our birthday celebrations could be seen as preparation for the feast day.”

Mother Teresa was born Agnes Gonxha Bojaxhiu Aug. 26, 1910, in Skopje, Macedonia. After joining the Sisters of Loretto at age 17, she was sent to Kolkata, where she later contracted tuberculosis, and was sent to rest in Darjeeling.

On the way, she felt what she called “an order” from God to leave the convent and live among the poor.

After she left her convent, Mother Teresa began working in the slums, teaching poor children, and treating the sick in their homes. A year later, some of her former students joined her, and together they took in men, women and children who were dying in the gutters along the streets.

In 1950, the Missionaries of Charity were born as a congregation of the Diocese of Calcutta. In 1952, the government granted them a house from which to continue their mission of serving Calcutta’s poor and forgotten. Today, they operate in 176 countries, serving the “poorest of the poor.”

Mother Teresa was canonized in 2016.

During his homily, Archbishop D’Souza said Christ invites everyone to service and pointed to Mother Teresa as a model of selfless love.

“Jesus invites us to love one another. The Mother served the poorest of the poor with selfless service and passionate love, giving them to Jesus through her work,” he said, according to Asia News.