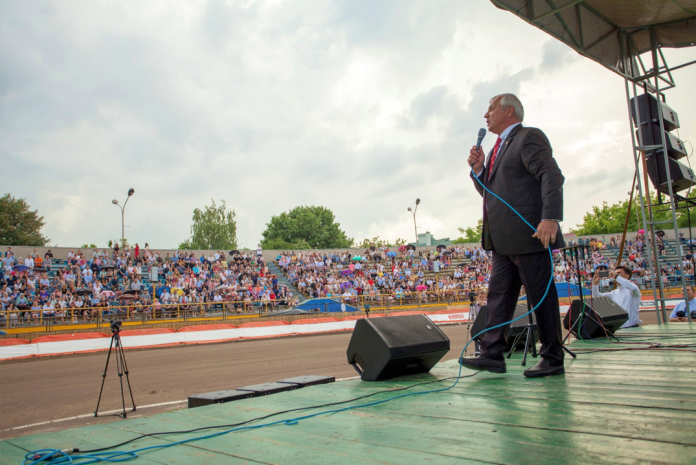 On June 7-9, 2019, a festive conference was held in city Rivne, Ukraine to celebrate the 30th Anniversary of the Good Samaritan Mission’s ministry.

30 years ago, in 1989 Slavik Radchuk founded Good Samaritan Mission and was elected by local Christian leaders as a first president of GSM. Many good words of encouragement and greetings were heard of the ministers towards the mission. Thanks to missionaries of Good Samaritan Mission it was possible to open new churches in different parts of the Ukraine, Crimea, Central Asia, Russia, Israel and European Union.

On June 7th, a missionary working conference was convened in the hall of the “Good Samaritan” office. The main purpose of the conference was to thank the employees, co-workers, volunteers and sponsors of the mission for the opportunity to continue the great work of the gospel, as well as the prayer for the consecration and renewal of the missionaries.

On Saturday, June 8th, the celebration of the 30th Anniversary continued in the Church. There where gathered about a thousand young brothers and sisters of the Evangelical churches of Rivne region. An important part of the conference was the history of the mission, which was held by its first director Slavik Radchuk. Also during the conference there were sermons, greetings, and wishes from bishops from different regions of Ukraine, international partners and missionaries.

On the same day, in the evening, participants had a crusade in the Central city park. About few thousand people were gathered to hear Good News about Jesus Christ. Many people gave their lives to Jesus.

On Sunday, June 9th, the conference continued in the Church. The blessed psalms were heard from the church choir. Many interesting and amazing thoughts were expressed by the ministers, but they were all in line with the slogan of the conference: “For I am not ashamed of the Gospel of Christ, for it is the power of God to salvation for everyone…” (Romans 1:16).

The conference ended with evangelistic crusade at the Rivne city stadium. Thousands of people came to hear beautiful songs and sermon. God has touched people’s hearts and they repented before Him.

The Anniversary celebration has finished, but the “Good Samaritan” mission continues to work. Missionaries are still continuing proclaiming the message of salvation, charity work, children’s camps and etc. Each of mission’s department works to achieve the common goal of converting people to the Lord.

Good Samaritan Mission in 30 years since it opened, has established over 500 new churches. Now over 200 missionaries continue to work on the harvest field.