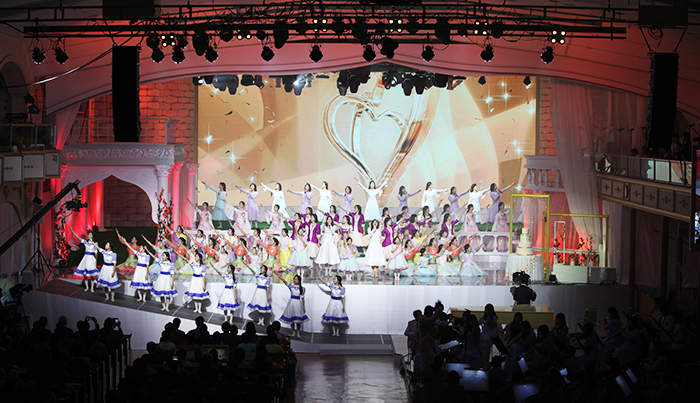 Manmin Central Church had its foundation service in 1982. Since then it has now grown to become a mega-sized global church with more than 11,000 branch and associate churches. In 2018 church were actively accomplishing national and global evangelism via the Global Christian Network (GCN) broadcast ministry that covers approximately 170 countries; conferences and festivals; the World Christian Doctors Network and the Manmin International Seminary.

They focused on the prayers, preaching, and visitations for counseling even in extremely cold weather. Especially, men’s cell, sub-district, and district leaders made visits to their church members after their work on weekdays or on Saturdays, during their free time. They won many new souls and brought back the lost ones. Those who participated in the campaign said they received many blessings including being filled with joy and happiness, recovering their first love, and experiencing God’s love.

Especially, the members of the Chinese parish experienced countless works of God’s power and were transformed through God’s Word, which caused them to have a great revival and to be united as one in love like the Early Church.

The Book of Acts tells of the extraordinary works that took place through the handkerchief that had been taken from the Apostle Paul’s body.

After the Sunday morning service on Feb. 18, the Senior Pastor prayed on the handkerchiefs for God’s power to be contained in them. These handkerchiefs were prepared by those members (Young Adults’ Mission members and older) who long for the powerful works of God.

Many meetings were held where the speakers prayed with the handkerchief for the crowd, in domestic branch churches and in other countries including Kenya, D.R. Congo, Singapore, Malaysia, Indonesia, and Pakistan. Many believers received healing and answer to their prayers, and gave glory to God.

GCN TV has been actively accomplishing their ministry, and a part of it has been having fellowship and cooperation with other Christian broadcasters worldwide.

They participated in the 2018 NRB Convention and Exhibition held in Nashville, USA, from Feb. 26 through Mar. 2, and newly initiated cooperation with various Christian broadcasters, exchanging technology and programs with them.

Also, GCN TV was invited to the International Christian Conference held in Peru from August 17 through 19. They played the videos of the powerful ministry of our church and the performances of our Performing Arts Committee, which brought about great responses and applauses.

GCN TV, since its opening in 2005, has been creating and transmitting to more than 170 countries programs of the Word of Life and the powerful works of God. There have been continuous responses of the viewers whose lives have been changed through those programs, sending their gratitude and testimonies.

At the Friday all-night service on March 30, more than 300 members of the Performing Arts Committee performed the Easter performance “The Lord’s Cross” on the special stage prepared in the main sanctuary. It was attended by pastors and believers from Russia, Belarus, Kenya, France, the United States, and Singapore. The scenes of the ministry of Jesus, His suffering of the cross, and resurrection and ascension touched many attendants’ hearts.

Manmin Central Church was invited to the celebration events of Israel’s 70th anniversary, which was held by March of Life organization of Germany and the Helping Hand Coalition of Israel and sponsored by the government of Israel.

The representatives introduced the church’s ministry in the opening event held in International Convention Center (ICC), Jerusalem, and in the Knesset, and in the VIP Convention. In the finale event, Power Worship Dance Team performed a Korean traditional fan dance that received a big round of applause.

The church has been praying for evangelism in Israel since our opening. Ministers conducted evangelical meetings in all corners of Israel for 3 years beginning from 2007. They preached that Jesus Christ is the Savior along with the manifestations of the power of God, and finally he spoke in the “2009 Israel United Crusade” held in ICC.

The church held “2018 Manmin Festival” at the Yeouido Park intersection in front of the Parliament on June 16.

This event was held under the title, “Manmin is preaching the living God, Manmin is practicing the love and goodness of the Lord, Manmin is spreading the holiness gospel and the works of God’s power!” It was an event to make known the ministry of the church that has been proclaiming the living God all over the world in obedience to the words of God in the Bible.

There was a video presentation of the testimonies of the church members who have experienced the power of God and received new hope in life through the prayers, followed by the praises, worship dances, and other various events.

WCDN is a meeting of inter-denominational Christian doctors from all over the world who medically clarify and confirm divine healing cases. They hold a conference in various parts of the world once a year.

This year’s conference was attended by more than 400 medical professionals from 17 countries, and various divine healing cases were presented, including recovery from acute pulmonary heart disease through prayer, and cases of cerebral hemorrhage, a fracture of humerus, cholecystitis, and recovering good eyesight. They gave glory to God who is alive even today and healing the people spiritually and physically.

2018 Manmin Summer Retreat was held on Aug. 6-8. It was attended by leading pastors and believers from 25 countries. There were the manifestations of explosive works of God’s power, and those who experienced such power gave glory to God with their testimonies.

The jumping park of Muju Deokyoosan Resort had the temperature of 23-26 degrees Celsius, which was the most pleasant weather condition, while the whole country was suffering from extremely hot weather. It was indeed God’s protection just as the land of Goshen was protected as in Exodus 8:22.

After the message, the speaker Pastor Soojin Lee prayed with the handkerchief . Numerous diseases were healed, and 24 deaf-and-mute people from other countries came to hear better or hear for the first time.
The works of the Holy Spirit also took place to the believers who were participating in the retreat on GCN TV and on the Internet in other countries, and it is reported that many diseases were healed including AIDS.

The church had the 36th anniversary on Oct. 7, which was attended by guests from 22 countries. With splendid celebration events they gave thanks and glory to God the Trinity who is leading the ministry of Manmin.

The 1st part, the worship service was live-broadcast on the Internet and by GCN TV that covers more than 170 countries. There were congratulatory messages sent from 31 countries. The 2nd part was the celebration events performed on the special stage in the main sanctuary with the title, “The Banquet Hall along the Flower Roads.”

The performance was created by some 290 performers and technical staff to express with joyful praises and dancing the scenes of the heavenly banquet hall. It was certainly a high-quality Christian cultural performance that added to the hope of heaven of the church members.

For the 36th anniversary, was installed a mega-size LED display panel as the backdrop of the main sanctuary, which can express various images including the Lord’s Second Advent in the air.

Those who received the dental care say they recovered not just dental health but also their confidence and energy.

Deacon Hyeonmo Lee (Age 74) said, “I’ve got a dental implant that fits perfectly, and I am so thankful that I can eat anything.”

Senior Deaconess Shinae Kim said, “I had to cover my mouth when I was laughing because I looked like a really old woman, but now many people say I look much younger and more beautiful.”