The growing crack-down on unofficial churches in China deepened on Sunday (Sept. 9) when authorities closed one of the largest churches in Beijing, according to reports.

The Beijing Chaoyang District Civil Affairs Bureau informed Zion Church that it was “legally banned” for organizing events without registering as an official Three-Self Patriotic Movement (TSPM) church, Reuters reported. The church has faced growing threats from authorities, including eviction, since it refused to comply with a government order in April to install closed-circuit television cameras at its worship site.

Bob Fu, president of advocacy group China Aid, said authorities are enforcing rules requiring registration as a TSPM church in order to exercise increased control over ideologies. He called the church closure part of a larger crack-down on Christianity across China.

“The massive clampdown against thousands of churches in Henan [Province] and the forced closure and total shutdown of the largest house church in Beijing, Zion Church, represents a significant escalation on President Xi [Jinping]’s crack-down down against religious freedom in China,” Fu said in a statement. “Now that the Chinese Communist Party has started to burn Bibles and coerce millions of believers in the Christian faith and other religious minorities to even sign a written pledge to renounce their basic religious beliefs, the international community should be alarmed and outraged at this blatant violation of freedom of religion and belief and demand the Chinese regime stop and remedy this dangerous course.”

Reuters reported that the church had operated for years with relative freedom.

More than 30 of Beijing’s hundreds of unofficial Protestant churches released a statement in July lamenting interference, assaults and obstruction since the new regulations came into effect.

“Uniformed and plainclothes police, as well as agents from the local religious affairs and cultural bureaus, invaded the service as the pastor, Chen Qi, was reading the Bible,” the organization reported.

One Christian told China Aid that officials grabbed the pastor’s microphone and forcibly stopped worship. The director of Luohe’s Yuanhui District Religious Affairs Bureau, identified only as Li, walked to the podium and announced that the fellowship was “illegitimate,” according to China Aid. 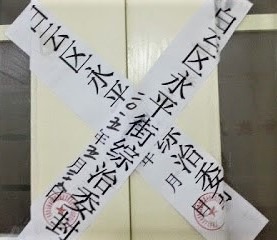 “After reading a document about the church’s supposed violation, he asked Chen to sign it, but Chen refused and was taken away,” the group reported. “An official said to him, ‘The document will be effective no matter if you sign it or not.’ During the ordeal, a woman stood in the hallway and photographed the situation. Police pulled her hair and slapped her face as they pushed her up against the wall. Once they were finished, they took her into custody.”

Several police officers also kicked another woman who disobeyed their orders to refrain from taking photos.

“She fell to the ground, and her cell phone was confiscated,” China Aid reported. “When her fiancé confronted one of the officers, saying ‘How can you bully a girl?’ he was punched and accused of assaulting the police.”

Also on Sept. 2, authorities in Xinyang, Henan Province, entered a church service without showing identification, expelled worshippers and welded the door shut, according to China Aid.

“Some of the congregants attempted to film evidence, but police took their phones,” the group reported. “Later on, the church rented a storage unit to hold their services in.”

Officials in the same area closed off the road leading to another church, prohibiting church members from entering, the advocacy group reported.

“Similar disturbances occurred in other areas of Henan, including Hua County, where Christians gathered in front of Baidaokou Church to prevent authorities from breaking in,” China Aid reported. “After a short confrontation, the authorities forced their way into the church and took chairs, desks, and a variety of other items. As they resisted, some of the Christians were injured and fell to the ground. After the authorities left, however, some of the congregants stayed and sang worship songs.”

Article 36 of China’s Constitution stipulates that all Chinese citizens have freedom of belief.

Also, the Nanyang Municipal Religious Affairs Bureau in Henan ordered all 20,000 house-church members in the province to join the Three-Self Church, according to China Aid. Many Chinese Christians disagree with the Three-Self Church based on theological discrepancies and rampant government censorship, making the forced merging of these two branches a violation of religious freedom, the advocacy group asserted.