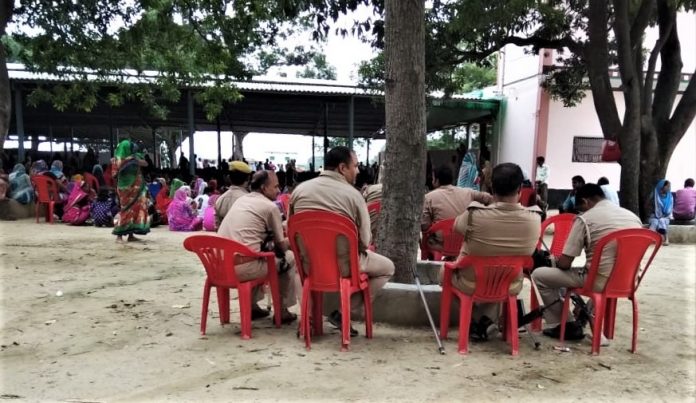 New Delhi (Morning Star News) – Dismissing an initial investigation that cleared Christians of wrongdoing, police under pressure from Hindu extremists are pursuing false charges against a pastor and 270 others, sources said.

After appearing to halt Hindu nationalists’ efforts to shut down a large church in northern India’s Uttar Pradesh state, police who had told the pastor that they turned up no evidence of fraudulent conversion are now denying the initial inquiry took place, sources said.

“I had placed hidden cameras all over the place,” Gupta told Morning Star News. “About 10-15 of them were stopping the three-wheelers going towards the church filled with people. They broke the vehicles and threatened the drivers to not carry passengers to church. The people were made to leave the transport.”

The Hindu extremists threatened the Christians, beat the drivers and broke the three-wheeled vehicles going in the direction of the church, Pastor Yadav told Morning Star News.

“Despite threats, people still came,” Pastor Yadav said. “Commuters who were asked to leave the public transport walked as much as four kilometers to come to church, and this went on for two weeks, even after the Aug. 5 Sunday [the church also has Tuesday services].”

Besides the pastor, the Hindu nationalists filed the charges against Kirit Rai, a Christian identified only as Jitandra and 268 others alleging conversion by fraudulent means and hurting religious feelings under section 156 (3) of the Criminal Procedure Code. Brijesh Singh and Siddharth Singh contended that the Christians “have been going about in Jaunpur and four other districts preaching against Sanatan (eternal) religion, i.e. Hinduism, alluring the poor and the downtrodden with money and converting them to Christianity.”

Dainik Jagran, a Hindi-language, national newspaper, reported on Aug. 2 that the complainants further alleged that the Christians “ridicule the worship of Sanatan religion and idols. They claim to cure incurable diseases and make the people testify of the false healing. They are made to eat the restricted food [Holy Communion] and made to shout praises to Jesus Christ and declare themselves Christians.”

The complainants also stated that such acts can lead to sectarian riots and that therefore action should be taken against them.

The Christians were also accused of hurting religious sentiments.

After the complainants filed the charges, the chief magistrate ordered Chandwak police to investigate, sources said. Members of a Hindu extremist youth group founded in 2002 by present Chief Minister of Uttar Pradesh Yogi Adityanath, the Hindu Yuva Vahini, then sought police permission to gather at the church site on Aug. 5.

Police denied their request and, anticipating an attack by the Hindu extremist group, deployed a large force in and around the village from 10 a.m. to 2 p.m.

“Expecting an attack on the church service, police from five police stations were deployed in and around the church,” said Gupta of National TV News.

As Pastor Yadav was in Allahabad that day, his daughter, 21-year-old Preeti Yadav, led the church service.

Gupta said he interviewed 500 of the 7,000 worshippers, questioning them about their faith and the allegations of “conversion by fraudulent means.”

“As many as I interviewed had stories to share about their sickness and how they got healed after Pastor Yadav prayed for them,” he told Morning Star News. “They said that they attended the church out of their own free will, and that they were not subjected to any force or allurement. They said that despite threats, they will continue to attend church.”

Gupta broadcasted his footage and investigation repudiating the allegations against Pastor Yadav and the other 270 Christians.

“It was a big relief that the case was dismissed against me and my church members,” he said.

On Wednesday (Sept. 5), however, the newspaper published the same false news story with a heading stating, “A case shall be registered against 271 Christians including the pastor against the allegations of religious conversion.” It stated that a court ordered the police on Tuesday (Sept. 4) to investigate and submit a report.

Station Head Officer (SHO) Shashichand Chaudhary told Morning Star News that police received orders from the court on Wednesday (Sept. 5) to investigate the accusations. Asked about the previous investigation on Aug. 5, with a report clearing the Christians submitted by officer Mahendra Kumar Yadav on Aug. 7, he denied any prior investigations took place.

“We had provided security to Pastor Yadav and his church on Aug. 5, but no investigations were made,” Chaudhary said.

Pastor Yadav was upset at this turn.

“Their objective is nothing but to cause trouble for me,” he told Morning Star News.

National TV News editor Gupta said he fears that the previous investigation report was dismissed in order to make way for the new investigation.

“A lot of pressure is being exerted by the Hindu fundamentalist political parties over the authorities, be it judiciary or the police,” he said.

Pastor Yadav said Hindu extremists continue to threaten him nearly every other week.

The allegations were preceded by false newspaper reports. After a report by a Dainik Jagran on July 21 alleging large-scale conversions of Hindus in Dobhi block went viral, police from Chandwak police station picked up Pastor Yadav’s brother, Jai Prakash Yadav for questioning on July 23.

Police interrogated the farmer for about three hours regarding his brother’s pastoral work.

“I was very concerned for my brother,” Pastor Yadav said, “but the police let him go after rigorous enquiry about me and the church activity.”

Several articles followed portraying the pastor’s church as carrying out conversion through allurement and alleging that he demeaned other religions and their deities, leading to the Aug. 2 case registered against him and 270 others.

Gupta of National TV News said he was shocked over the newspaper’s “twisting of facts.” He told Morning Star News that some of the village names mentioned in one article did not exist. The interviews of people attending church were distorted, he said, and a police officer-in-charge denied making a statement attributed to him.

“I interviewed the same people, and they told me that they were told that their testimony of faith in Christ would be published in the newspaper and hence they testified without apprehensions,” Gupta said.

They told the reporter that the pastor had not told them to stop going to Hindu temples, and that they decided on their own to stop doing so. They told him they believe in Jesus of their own free will, and that they will continue to do so as it is their fundamental right to do what they choose, Gupta said.

Recalling an assault by senior officers at the police station a year ago brings chills to him even today, Pastor Yadav said.

Two policemen came to his house one morning in June 2017 and told him to go with them to the police station, he said. Upon arrival, he learned that the sub-divisional magistrate (SDM) had ordered the station house officer (SHO) to summon him.

The SDM soon arrived and began questioning and assaulting him, the pastor said.

“He screamed and shouted at me, blaming me that I would convert the whole of Uttar Pradesh into Christianity,” Pastor Yadav told Morning Star News. “He asked me to leave the state and go somewhere else. Whatever answer I gave, he would hit me with a patta [the belt in a police uniform].”

The SDM advised Pastor Yadav to become a Sadhu, a Hindu monk who has renounced worldly life, grown a beard and performed Hawan/Homa, Hinduism’s purification procedure, he said.

“I was physically assaulted, verbally abused and beaten badly and was told to leave the city,” the pastor said.

The SDM told the SHO to keep him in custody and register a case against him.

This incident left him injured and frightened, he said.

“I wept bitterly one day and asked God if I should leave all of this and go away,” he said.

Looking for an answer, he opened the Bible and happened upon the Book of Jonah, he said.

“God spoke to me through it, telling me that neither the waves of the sea, nor the stomach of the fish could kill Jonah. God wanted him to remain alive to go to Nineveh, and so he did. I got this assurance that no one can kill me until the Lord allows,” he said. “And when the day comes for me to go, I will be more than happy, as, ‘For to me, to live is Christ, and to die is gain [Phil. 1:21].’”