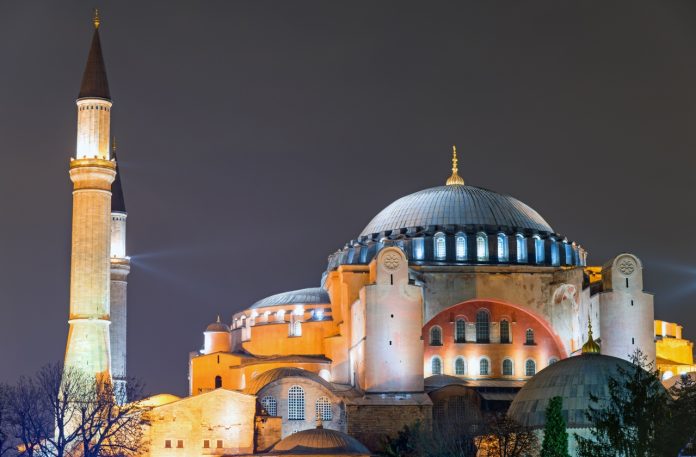 07/25/2020 Turkey (International Christian Concern) – On Friday, the Hagia Sophia cathedral reopened for Islamic worship for the first time after 86 years. Prior to its reopening, President Erdogan unveiled a new plaque for the religious site: The Hagia Sophia Grand Mosque. The head of the Turkish Presidency of Religious Affairs (Diyanet), Ali Erbaş, led the service’s sermon.

With approximately 350,000 people attending the Friday service, Erdogan began by reciting verses of the Qur’an. Then Erbaş, with a sword in hand, read a special khutbah (sermon) entitled “Hagia Sophia: Sign of conquest, our trust in Fatih (Sultan Mehmet).” Along with the presence of the sword, the pulpit also had two green banners hung upon it, which the Ottoman Empire historically used as a sign of conquest.

“Today is the day when takbirs (Allahu akbar), prayers, and salavats (salutation upon the prophet of Islam) resonate in the domes of Hagia Sophia, and the adhan (call for prayer) rises from its minarets,” said Erbaş. “Today is the day when believers stand up in prayer with tears of joy, bow down in submission and prostrate thankfully. Today is the day of honor and humility.”

While a day of celebration for the Muslim community, yesterday served as a day of mourning for Christians across the world. A cathedral once the center of Eastern Orthodox Christianity has seen its Christian frescoes covered and its identity changed once more. Despite its proclaimed secularism, Turkey’s attitude of conquest continues to present persecution and discrimination toward its Christian communities.