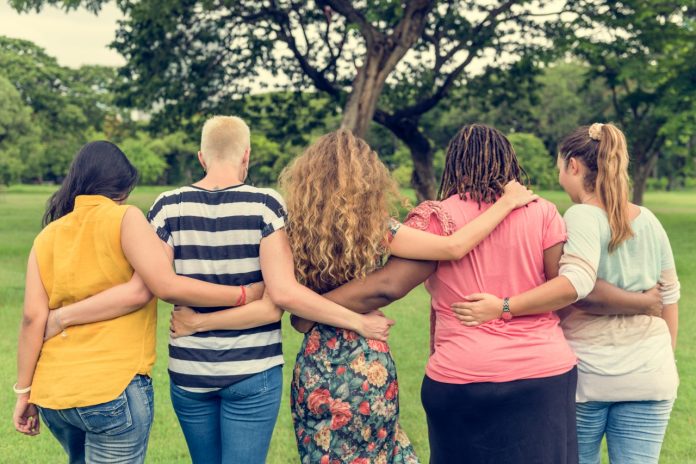 When church bells tolled at the 11th hour on 14 June, they were signalling solidarity with a national “strike” for women’s equality held throughout Switzerland with full backing from the ecumenical community, including the World Council of Churches (WCC).

At 11 o’clock, prayers were held in the chapel at the Ecumenical Centre and outside the United Nations in Geneva as women and men gathered in blustery conditions under the three-legged chair to speak about something they said has gone on for too long, paying women far less than men and not treating them equally in the workplace.

In Geneva, the local ecumenical group of Protestant and Catholic churches are supporting the calls for respect, dignity and equality. From the Temple de Plainpalais people in the march for equality crossed the street to the big demonstration there.

A programme of workshops and presentations was held at the church at Plainpalais, examining issues such as “#MeToo in the Bible,” and providing materials and workspace to produce placards for the afternoon march.

“The World Council of Churches entirely supports the values of equality for women which underpin the actions planned for 14 June. We will accompany the work done by the local churches in Geneva,” said WCC general secretary Rev. Dr Olav Fykse Tveit.

Rev. Charlotte Kuffer, a Reformed pastor and the former president of the Protestant Church of Geneva, was inside the church and she tweeted, “What about the compatibility between the world of work and maternity? This is a real challenge.”

Across Switzerland, women took to the streets protesting what they say is the country’s unacceptably slow pace to equality, and 28 years after similar action saw half a million women take to the streets in 1991 when there were no women in the Swiss government, and there was no statutory maternity leave.

At 15:24 (24 minutes after three), as a national symbolic moment, many people left their places of work to make their way to Plainpalais,  an open square close to the centre of Geneva.

The colour was purple, the day after the weekly WCC-led Thursdays in Black, a global movement for a world without rape and violence.

Under the three-legged chair

In the afternoon before marching from the UN in Geneva, past the World Trade Organization on the banks of Lake Geneva to Plainpalais, WCC staff members and staff and students from the WCC’s Ecumenical Centre in Bossey gathered under the iconic three-legged chair.

They cheered when UN intern Salorne Persyn read a speech saying, “For years, unpaid internships have hindered many people’s ability to intern for the United Nations, but it has been detrimental to women especially. According to a 2017 survey conducted by the Fair Internship Initiative (the Fill), over 80 of the respondents were unpaid, and 72 of UN interns were female.”

Persyn noted, “Division of unpaid labour within households and across societies is already a gendered struggle as well as class-based struggles.”

So, they were demanding that internships be paid so that they are accessible to all, regardless of their socioeconomic background.

The organizers said in their manifesto, “We want to promote gender equity and women’s rights. We want a society based on equality and solidarity, without discrimination, without sexism and violence against women, regardless of the colour of our skin, our culture, our origin or religion, our passport, our sexual and gender identity, our age or social status.”