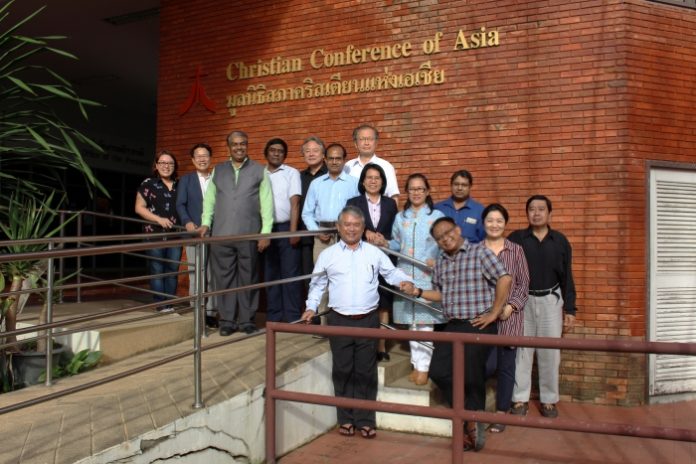 General secretaries and other high-ranking national church leaders from nine Asian countries gathered in Chiang Mai, Thailand from 4-7 September to pave the way for a coherent and well-coordinated Pilgrimage of Justice and Peace (PJP) Asia Focus-2019.

Convened jointly by the Christian Conference of Asia (CCA) and the World Council of Churches (WCC), the preparatory consultation was held at the CCA headquarters in Chiang Mai. Its special objective was mobilising Asian churches to reflect bottom up on the current situation, both in each country specifically and in Asia in general, and prepare the churches to respond within WCC’s PJP framework.

“We felt a need to identify issues and concerns within the broader framework of the Pilgrimage of Justice and Peace which could be filtered down to a common thread. Quite a thorough exercise was undertaken to identify a common theme and prioritise the programmes of PJP Asia Focus-2019. Asia is diverse and every country has its own specific problems”, CCA general secretary Dr Mathews George Chunakara explains.

“Having undergone this consultation and working process we are better equipped now to plan, coordinate and implement the PJP Asia Focus in 2019 properly, involving all member churches of both WCC and CCA. It is an opportunity to demonstrate unity which will strengthen the ecumenical movement”, Chunakara continues.

Listening to grassroots voices, the CCA general secretary believes, is the key to understanding ground realities and needs essential for establishing a sense of ownership by the member churches and national ecumenical councils.

“The important aspect through this process is to bring the PJP-message to the churches and members, to understand it and embrace it. This will then enable us to have a common platform to work from”, he says.

The theme proposed by the Chiang Mai consultation will now be presented to the WCC leadership group for affirmation.

To highlight the PJP focus, Pilgrim Team Visits to India, Bangladesh, Myanmar, Thailand, Indonesia, Sri Lanka and the Philippines will be arranged in 2019. Most of these visits are scheduled for 27 February-3 March, after which the annual meeting of the PJP Reference Group will be held in Chiang Mai from 4-7 March.

“As the representatives of Asian churches have been brought together to initiate and plan the PJP Asia focus, as well as to identify the pertinent issues systematically from a local context and grassroots perspective, we now have a solid foundation in place for a successful PJP Asia focus next year”, Chunakara adds.