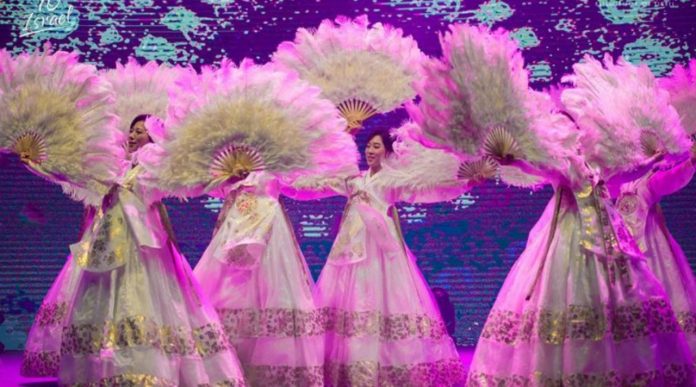 The year 2018 means a lot to Israeli people in a historical sense. Jewish people who had scattered around the world, re-established the first Jewish state in approximately 1,900 years on May 14,1948. This year, 2018, is the 70th anniversary of re-establishment. The Helping Hand Coalition, Israel and March of Life, Germany hosted a celebration event for the 70th anniversary of Israel with the active support of the Israeli government.

The video congratulatory message from Israel President Reuven Rivlin was presented and key-note speakers gave congratulatory speeches. This event was broadcast live on GOD TV and a TV station of Germany.

On May 13, the mission team of Manmin Central Church attended the Opening Ceremony in guest VIP status. It was held at the International Convention Center, Jerusalem where Dr. Jaerock Lee’s Israel United Crusade 2009 was held. On May 14 and 15, the mission team was invited to the Knesset and a Convention for VIPs. Elder Johnny Kim, Director of GCN, offered greeting messages and spoke about Dr. Lee’s ministry.

The mission team’s performances were well-received by people.

On the evening of May 15, the Festival of Life was held as the finale event in the open air arena “Sultan’s Pool”. The Power Worship Dance Team of the Manmin’s Performing Arts Committee presented a Korean traditional fan dance. The audience continued to shout with joy and give them a rousing applause.

Many of the audience said their performance was by far the best performance that they had never seen before, and they felt heaven from it.

On May 12, the Crystal Music Festival 2018 was held under the host of Crystal Forum (Israeli Pastors’ Association) and the Helping Hand Coalition. The event was broadcast live in over 170 countries through GCN, TBN Russia, CNL, In Victory, and CMTN.

The festival was held at the International Convention Center in Haifa and was attended by approximately 1,300 people from several countries including Israel, the U.S., Russia, Poland, and Latvia. Haifa Deputy Mayor Yulia Shtraim attended and many members of the Knesset including Tali Ploskov, Deputy Speaker of the Knesset, sent congratulatory video messages.

The welcoming messages of Dr. Adre Gasiorowsky, Chairman of Helping Hand Coalition and Pastor Oren Lev Ari (King of Glory Church, Jerusalem) opened the event. Elder Johnny Kim was allotted time to offer a greeting message to the audience. In his greeting he congratulated the 70th anniversary of the State of Israel and delivered Senior Pastor Dr. Jaerock Lee’s love for Israel.

Praise Leader Rose Han, Vice Chairperson of Performing Arts Committee together with the Power Worship Dance Team showed different genres of performances twice. Praise Leader Han’s praise moved the audiences’ hearts, and when she led praise, they praised together and received new strength and comfort. The Power Worship Dance Team’s fan dance amazed the audience with its beauty, and the team’s Israeli traditional dance and worship dance filled them with joy.

When Praise Leader Han sang the national anthem of Israel to celebrate the 70th anniversary of Israel in particular, all people in attendance stood up and became united singing. In addition, well-known Israeli gospel singer Joshua Aaron and other Israeli praise singers as well as others from the U.S., Russia, and Latvia offered great performances.

On May 18, Pentecost Celebration Meeting was held in King of Glory Church, Jerusalem. After the performances of Manmin’s performers, Elder Johnny Kim delivered the message entitled “The Work of the Holy Spirit” based on Acts 1:2-4.